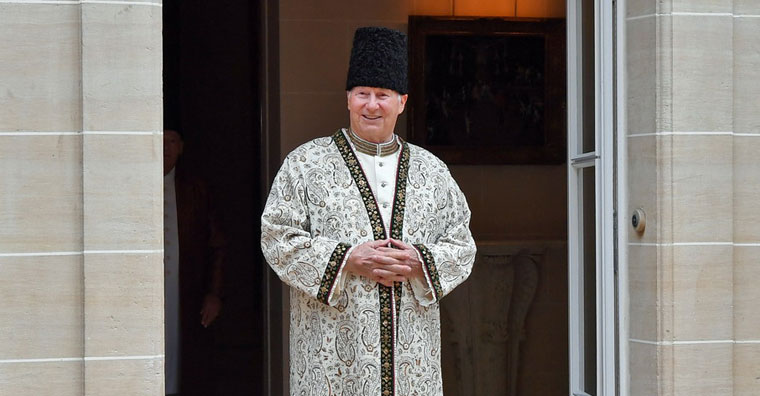 Id al-Adha is the day which marks when Prophet Abraham sacrificed his son Ismail by the command of God. The literal story as related in the Qur’an (Surah 37) describes how Abraham saw in a vision that God ordered him to sacrifice his only son and as Abraham was about to slaughter his son Ismail, God miraculously replaced Ismail with a “momentous sacrifice” – which Muslim tradition identifies with a ram.

For Ismaili Muslims, this story of Abraham’s sacrifice of Ismail and Ismail’s replacement with a “momentous sacrifice” holds an esoteric meaning (ta’wil) which is the reality (haqiqah) of the entire story. According to the holy Qur’an (2:124), Hazrat Abraham was the Imam of the time appointed by God and this Imamah continues by divine appointment in Abraham’s progeny. “Sacrifice” means to “make sacred”. The Imam who bears the weight of the Imamat has sacrificed his entire life, soul and being in the perpetual service of God and humankind and this is the ultimate spiritual sacrifice.

Thus, the divine command for Abraham to SACRIFICE Ismail does not mean to sacrifice him physically but TO APPOINT ISMAIL as the successor to the IMAMAT after him. So when the holy Qur'an says:

This means that Abraham THEN APPOINTED his second son Isaac to the Imamat to share the burden of Imamat with Ismail. Thus Abraham’s two sons, Ismail and Isaac, succeeded to the Imamat: Mawlana Ismail was the Permanent Imam (imam mustaqarr) and Hazrat Isaac was the Entrusted Imam (imam mustawda) established as a deputy and veil (hijab) for the Permanent Imams. As Henry Corbin explains, the “ram” with which God substitutes Ismail’s sacrifice is none other than Isaac himself:

"Here again the whole body of Ismaili Gnosis may be taken as a guide. By this Gnosis, Ishmael is regarded as the Spiritual Heir, the Imam who holds the secret of the Gnosis, while Isaac is a Veil: the veil or screen of the Letter which is placed before the Imam. The relationship between them corresponds to the fundamental distinction between the appointed and permanent Imam (mustaqarr), and an Imam who is merely a depository or curator (mustawda), established as a kind of protection during periods of danger and apparently performing the functions of the true Imam, while the latter remains hidden. Ishmael was the Upholder of the mystical meaning, of the esoteric science of ta'wil, while Isaac was before him as a Veil, maintaining the science of tanzil, of the revealed Letter and of positive religion. The same relationship is perpetuated in the course of their respective lineages…Whereas Moses established a new Law (shari'at), a new positive religion, the descendants of Ishmael continued and transmitted the esoteric message of Gnosis.”
- Henry Corbin, (Temple and Contemplation, 167)

Prophet Muhammad and Imam ‘Ali ibn Abi Talib descend from the hereditary Imams of the progeny of Ismail son of Abraham. Today the living Imam is Shāh Karīm al-Ḥusaynī Āgā Khān IV. Today the spiritual sacrifice of Prophet Abraham and his son Mawlana Ismail continue to be embodied in the person of Mawlana Hazar Imam.

When he assumed the office of Imamat on July 11, 1957, Mawlana Hazar Imam boldly declared that he was dedicating his entire life and existence to serving his followers and the world of Islam:

"I have dedicated my life to the uplift and progress of the Ismailis all over the world and I pray for all your happiness and success."
- Imām Shāh Karīm al-Ḥusaynī Āgā Khān IV, (Willi Frischauer, The Aga Khans, 217)

"My grandfather dedicated his life to the Imamat and Islam, both of which came first, and above all other considerations.... My life, as his, will be dedicated to the service of my followers."
- Imām Shāh Karīm al-Ḥusaynī Āgā Khān IV

In a candid interview given in 1969, Mawlānā Shāh Karīm al-Ḥusaynī describes the struggles that he undergoes in fulfilling the mission of the Imamat:

"I hardly have time to think about myself. I have my moments of fatigue, anxiety, but without the feeling of abandonment. I am engaged. I have to weigh, to consider, to try make a wise decision. But, with my advisers, I escape the isolation. “Responsibility is a burden we love.” I received from my grandfather responsibilities that are heavy but not burdensome. This is not a burden. It is a pleasure to devote oneself (de se consacrer = “to sacrifice oneself”) to such a community, to work for people. The responsibilities are a burden that we love to wear."