As A Muslim Spiritual Leader, Is it Problematic for the Imam to be Wealthy? 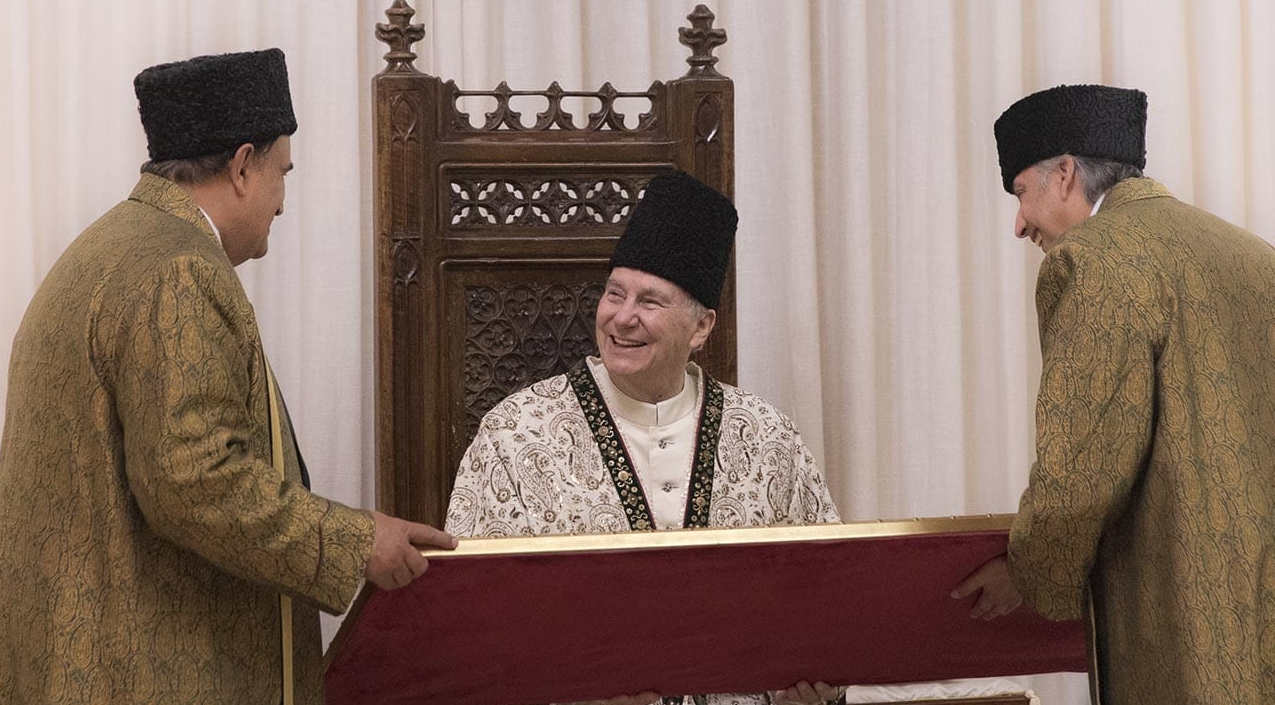 The Imam today is wealthy, but is this really a problem from an Islamic perspective? There is no teaching in the Quran or from the Shia Ismaili Imams that possessing great wealth or being rich is a sin or against God’s guidance. Morally speaking, being wealthy or poor is ethically neutral. A person’s moral status in Islam is based on their spiritual virtues and the intentions behind their actions. Actions have ethical value based on their intentions and their effects on other people. If being wealthy in and of itself was sinful, then many human beings through their hard work or fortunate circumstances are great sinners just for being well-off!

Unfortunately, the media narrative about Hazar Imam’s wealth is very much informed by the Christian idea that wealth is either evil or a temptation towards sin and that poverty is the highest aspiration for a true man of God. Today many almost fetishize the idea of a spiritual leader living in poverty because it comes from this Catholic idea of monks and saints taking vows of poverty, and the physical appearance of people like Gandhi or the Dalai Lama. For example, here is a Christian commentary about the dangers of wealth per the Bible:

“But while it is not sinful to be rich it is very dangerous and certainly perilous to one’s salvation (Mt 19 23). Of this fact the rich young ruler is a striking example (Lk 18 22.23). It is because of the danger of losing the soul through the possession of wealth that so many exhortations are found in the Scriptures aimed esp. at those who have an abundance of this world’s goods (1 Tim 6 17; Jas 1 10.11; 5 1, etc)… Those possessing wealth are liable to certain kinds of sins against which they are frequently warned.”

Even then, the Western obsession with poverty as spiritual virtue today is much more theoretical than real. People forget that the Catholic Church is one of the world’s richest institutions worth in the hundreds of billions and even owns a bank; many Protestant Christian pastors in America are multi-millionaires due to the donations of their congregations and related businesses; even the Dalai Lama is basically the sovereign ruler of Tibet and has a net worth of $150 million.

But let us remember: we are not Christians; the Imam is not Christian; Muslims should not be held to account by Christian moral values. The Muslim view of wealth generally speaking (excluding some early Sufis who revere poverty) differs greatly from the above Christian idea. If one is going to pass judgment on the Imam’s lifestyle (and one does so at their own peril) one should not be judging the Ismaili Imam by Christian standards. Below is Hazar Imam’s articulation of the Muslim view toward wealth and its ethical implications; his statement represents his own ethical teaching and thinking on the matter:

“Islam doesn’t say that a proper practice of the faith means you have to ignore the world. What it says is: Bring to the world the ethics of your faith. If you have wealth, use it properly. But the actual ownership of wealth is not in any way criticisable unless you have acquired it through improper means or you are using it for improper purposes. It is seen as a blessing of God. So this whole notion of conflict between faith and world is totally in contradiction to the ethics of Islam.”

“In Islam there is nothing wrong in the search for comfort, but the accumulation of wealth for the specific purpose of accumulating wealth or personal power is something which Islam does not like to see. If you are fortunate enough to go past what you personally need then share what you have.”

There have been great Prophets in the past such as Abraham, David, Solomon and even Prophet Muhammad who were quite wealthy: they owned considerable resources including entire kingdoms, palaces, treasuries, armies, house servants, horses, etc. and yet they were God’s chosen Prophets who do not commit any sins and never act unethically. Even the Christian thinker Saint Augustine, well known for praising poverty and celibacy, admitted that Prophet Abraham was a very wealthy man and possessed great riches but that there is no sin in being rich; the sin only lies in the inordinate love of riches.

The Qur’an refers to material wealth as a blessing and mercy from God:

Do they distribute the mercy of your Lord? It is We who have apportioned among them their livelihood in the life of this world and have raised some of them above others in degrees [of rank] that they may make use of one another for service. But the mercy of your Lord is better than whatever they accumulate.

The Qur’an, in a few verses, also criticizes those who attack the Prophet and the Believers because of their wealth. The Quran speaks about Believers who possess wealth in this world. It tells them to display their “adornment” (zina) – a word which includes things like nice clothes, food, possessions, etc. and it simply says not to be excessive. The verse goes on to refute people who seek to forbid the adornment of God, that is the material wealth that God has given to certain human beings in this world.

“O children of Adam, take your adornment (zina) at every place of prayer (masjid), and eat and drink, but be not excessive. Indeed He likes not those who commit excess. Say: “Who has forbidden the adornment of God (zinat Allah) which He has produced for His servants and the good things of sustenance?” Say: “They are for those who have faith during worldly life but exclusively for them on the Day of Resurrection.”

In an early interview, the Imam was asked about the concept of wealth in Islam and he contrasted it with the Christian teachings of Protestantism. The Imam also charged that the Western media is totally biased and misinformed about his person and his work:

Aga Khan: “I don't think there is any idea in Western Europe of what I stand for and what my work is. This is partly because newspapers are businesses and many have to make money out of gossip and personal details, partly for real historical and religious reasons. In the West, you are used to seeing religious figures completely divorced from ordinary life. You require them to be so. With us this isn't the case. The Head of the Faith can lead an absolutely everyday life. Our Prophet Mohammed was himself after all a business man and a leader of the army. In the Christian world you have this heartrending dichotomy between what is narrowly good and what is worldly. We try to attribute goodness to each of these areas, in proper balance.”

Interviewer: “I think perhaps in the West there is some misunderstanding and occasionally resentment towards you because you are supposed to be so rich. Because Christianity preaches poverty, and modern politics preach egalitarianism, we tend to think the rich are frivolous, or evil, or both.”

Interviewer: “Nor, in practice, does Western Capitalism.”

Aga Khan: “No, but the Christian religion, at its most extreme or puritan, does. With us, a poor Muslim will be happy to meet a very rich man, if this rich man has done good for Muslim society. And if a rich man has proved he wishes to help his society, then his desire is to display his riches. Making money isn't badly regarded by any Muslim.”

(The Sunday Times Interview, ‘The Ruler Without A Kingdom’, NanoWisdoms http://www.nanowisdoms.org/nwblog/1400/)

Regarding Prophet Muhammad, to be brief, he did not live the life of an ascetic monk that was free from life’s comforts. Maybe by our standards of modern technology and material abundance, the Prophet was not rich. But by the standard of his 7th century Arabia, Muhammad was quite well off. His wife Khadija was very rich and the Prophet lived under her provision and was well taken care of. During his mission, the Prophet married 12 women; many of his wives were decades younger than him and also beautiful (Aisha, Rayhana, Safiyya, Zaynab, Juwayriyya, Marya the Copt). The Prophet was also a person very involved in the daily activities of his society – he was a tribal leader, military leader, arbiter, a businessman who continued trading all his life, the political leader of Medina, and responsible for the redistribution of wealth because all zakat, sadaqa and war booty was given to the Prophet to manage. At the same time, the Prophet was a holy man and served as God’s representative in all matters for the community. The funny thing is that Sunni Muslims who fully accept Prophet Muhammad doing all of the above have the nerve to criticize Hazar Imam’s lifestyle which is quite consistent with how Muhammad lived in his own time.

During the Medina phase of his life, the Prophet’s role and status was very elevated; the Prophet did not behave like a lowly person among his followers. On the contrary, the socio-political & religious status of Muhammad for his community was quite regal and royal. In the Quran, for example, you cannot raise your voice above the Prophet; you cannot yell or call out his name; you cannot enter his house without permission; you must treat Muhammad with utmost reverence; you cannot even look at his wives and they cannot remarry after his death. Muhammad receives many offerings from the Believers like food offerings, one fifth of war booty, which he would eat from and enjoy. One scholar describes the socio-religious status of Muhammad as follows:

“Medinan texts closely link the Messenger with God by calling not only for obedience to “God and His Messenger” but also by demanding “belief in God and His Messenger” (Q. 49:15, 57:7.19.28, 64:8), as opposed to “belief in God and the Last Day”. Such bracketing induces what David Marshall has described as a “godward movement of the Messenger”. Q. 9:128 goes so far as to ascribe to the Messenger two attributes (kindness and mercy) that are otherwise reserved for God and thus implies the Messenger’s “participation in divine characteristics”… *In line with the lofty status claimed for the Messenger, Medinan passages repeatedly address the etiquette of being received by him or interacting with members of his household (Q. 24:62-63, 33:53-55, 49:1-5, 58:12-13). An atmosphere of almost courtly distance is thus created around him… In sum, the Medinan suras portray the Messenger as an awesome, towering figure who unites paternal, kingly, and priestly aspects and whose role certainly goes far beyond the function of relaying divine revelations that is predominant in the remainder of the Qur’an.”