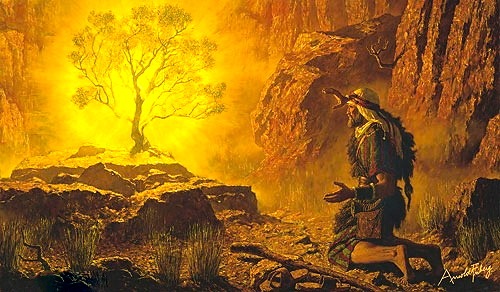 In various esoteric traditions, "fire" can have either a negative meaning or a profoundly positive one. In Ismaili literature, "fire" is associated with illumination of ta'yid (Divine support) through the Holy Spirit, received in the heart. This concept is firmly rooted in the Qur'an and in the subsequent teachings of the early Imams:

The fires are diverse, varied. Among them is the fire of love and gnosis burning in the hearts of the monotheists; while the fire of hell burn in the hearts of the disbelievers. When the fires of love ignite in the heart of the believer, they burn up every eagerness for (what is) other than God, and every remembrance other than His remembrance.
- Imam Jafar al-Sadiq, quoted in, Spiritual Gems: The Mystical Qur'an Commentary Ascribed by the Sufis to Imam Ja'far al-Sadiq
(Translated and Annotated by Farhana Mayer)

One of Jesus' apocryphal sayings is as follows:

The story of Moses' (Hazrat Musa) perception of a fire ( nar) in the direction of Mount Tur (this event is otherwise known as the episode of the "burning bush") is recounted in verse 28:29 of the Holy Qur'an:

Now when Moses had fulfilled the term, and was travelling with his people, he perceived a fire ( naaran)  in the direction of Mount Tur. He said to his people: "Bide ye; I perceive a fire ( aanastu naaral) ; maybe I will bring you from there some information (khabar), or a brand (jadhwah) from the fire, that ye may warm yourselves" (Qur'an, 28:29).

Shin Nomoto, in his Ph.D thesis on Abu Hatim al-Razi (the 9th century Persian Isma'ili Philosopher and Chief Da'i of his region), quotes another great Isma'ili theologian, Qadi al-Nu'man, who wrote a book of ta'wil called the Asas al-Ta'wil. According to Qadi al-Nu'man, Moses' perception of the fire was not an external event; rather it was something he perceived within himself - within his soul:

"The metaphor for the "fire" [in verse Q 28:29] (mathal al-nar) is that for the rank of enunciator-prophet (hadd al-natiq) [which comes] from the light of divine support (nur al-ta'yid): he (i.e. Moses in the verse) says "I feel the light of divine support in myself." The metaphor for the mountain is that for the grade of enunciator-prophet, that is, the messengership itself (nafs al-risalah)."
- (Qadi al-Nu'man, Asas al-Ta'wil, quoted in Shin Nomoto, Early Ismaili Thought on Prophecy...pg, 219).

According to Qadi al-Nu'man's ta'wil of 28:29, when Moses says, "I perceive a fire (nar)" what is meant is that Moses feels the intense Light (Nur) of ta'yid (Divine support) within himself. Moses himself, at the grade of Rasul, is the Mountain. The Mountain being a symbol for a high rank above others. According to al-Nu'man, the story of Moses' encounter with the "fire" represents his initiation into the office of enunciator-prophethood (Natiq).

If perceiving a fire means that Moses could feel the Light (Nur) of ta'yid within himself, then the rest of the verse tells us that Moses would, as a result of the ta'yid (Divine support), bring information (khabr) or guidance for his people - meaning that his companions would benefit from this Divinely inspired information (khabr) Moses would share with them. By "or a Fire Brand (jadhwah) with which his people could warm themselves" is meant a portion of the ta'yid (ism-i a'zam) itself that is shared with the advanced from his people, in a measure relative to their rank of spiritual progress, by which they could continue their journey of spiritual advancement. [For a detailed analysis and exploration on the concept of spiritual ascension through the ism-i a'zam in the Qur'an, see this article]

"By khabar is meant knowledge and guidance, and by jadhwah, ism-i a'zam, and by warming from the fire, to benefit from ism-i a'zam or the supreme name."
- 'Allamah Nasir al-Din Nasir Hunzai, Precious Treasures, 63

This is further confirmed when one looks closely at the following verse of the Qur'an where it is said that the one who is in the Fire is Blessed (referring to the recipient of the Fire or Light in the heart) as well as whoever that is around it (referring to the close ones or followers of the recipient of Ta'yid that benefit from being near to him, having access to his Divinely inspired guidance):

When the above esoteric meaning is understood, it can be comprehended that this receiving of a Fire ( Nar) or Light (Nur) in the heart and subsequent sharing of its benefit with one's followers is exactly what the Holy Prophet Muhammad used to do during his Prophethood. Fortunately, this tradition continues today with the Living and Present Imam of the Time of the Shi'a Isma'ili Tariqah of Islam as the recipient of ta'yid (Divine support), being continuously nourished by illumination (nur) in his heart. His followers and close ones benefit by virtue of being near and having access to the Divinely inspired guidance or information (khabr) that he provides:

Since my grandfather, the last Aga Khan, died, I have been the bearer of the Nur - a word which means 'The Light'. The Nur has been handed down in direct descent from the Prophet. But my work and responsibilities overflow into the practical side of life.
- Imam Shah Karim al-Husayni Aga Khan IV,
( Sunday Times Weekly Review - Interview, Dec 12, 1965 )

After Q 28:29, in which Moses perceives the fire, the very next verse in the Qur'an continues the narrative of what Moses experienced and tells us:

But when he came to it, he was called from the right side of the valley in a blessed spot - from the tree (shajara), "O Moses, indeed I am Allah, Lord of the worlds." (Qur'an 28:30)

Moses having his intimate experience with Allah through the mediation of the tree (shajara) is quite significant, since the Qur'an heavily uses signs (ayat) and symbols (mathal) to indicate deeper truths. If we examine another verse of the Qur'an (14:24) where the symbol of the tree is used, we will better understand the true meaning of the Moses story.

Have you not seen how Allah has set forth a parable? A pure word (kalima) is like a pure tree (shajara), whose root is firmly fixed and whose branch is in heaven. (Qur'an 14:24)

" The pure word is the ism-i a'zam, which a pious murid receives from the Imam of the time, and the pure tree is the blessed personality of the Imam of the time himself. Among these, one ism-i a'zam is in the form of a personality and the other is in the form of a word. But the very great miracle of God is that in the personal world both become one. That is, the Imam becomes the speaking word and the word becomes the blessed light of the Imam."
- 'Allamah Hunzai, Thousand Wisdoms, p. 280

This tells us that Hazrat Musa must have rose up to the rank of Natiq (enunciator-prophet) and had his blessed experience through the help or mediation of the Imam of his Time, as symbolized by the pure tree, who must have provided him a pure Word to meditate upon. We have already linked above to the article which explains how Prophet Muhammad also became a Prophet through meditating upon the Name of God (ism-i a'zam). [See this article regarding the existence of Imams prior to Imam Ali ibn Abi Talib who was the first Imam of the era of Prophet Muhammad but not the very first Imam over all.]