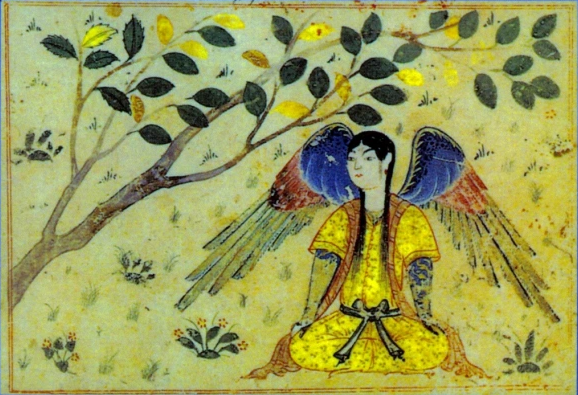 In his book, Jami al-Hikmatayn, Nasir Khusraw, the Ismaili Hujjah of Khurasan, clearly tells us that every human being has a jinn like quality within him or her. This jinn like quality is the "rational soul", which is also a "potential angel" - because jinns are potential angels. Using the word "parī", which is the Persian equivalent for the arabic word " jinn", Nasir Khusraw writes:

"angels are souls of surpassing benignity and subject to the nature of the heavenly sphere. And if asked, what is a ‘demon’, we answer that they are wicked souls"
- Nasir Khusraw, Jami al-Hikmatayn (in Between Reason and Revelation by Eric Ormsby, p. 90)

" Islam acknowledges the existence of angels, of great souls who have developed themselves to the highest possible planes of the human soul and higher, and who are centres of the forces which are scattered throughout the Universe. Without going as far as Christianity, Islam recognizes the existence of evil spirits which seek by means of their secret suggestions to us to turn us from good, from that straight way traced by God's finger for the eternal happiness of the humblest as of the greatest-Abraham, Jesus, Mohammed."
- Mawlana Sultan Muhammad Shah, The Memoirs of Aga Khan: World Enough and Time

Nasir Khusraw goes on to further tell us that what makes the  parī or potential angel, which is also the rational soul, leave this world as an angel is obedience and what makes it leave the world as a demon is disobedience:

The Ismaili Path is the Path of Transformation, whereby one can evolve one's soul to the level of an angel. Thus, Nasir Khusraw also tells us that it is the Prophet and the Imams who must be obeyed in order to become an angel in reality. This is because the one who has the ability to make someone an actual angel from a potential angel must themselves be an actual angel.

"[And let us praise] the angels of the heaven of religion, guides of the worlds to the Last Day, the Imams of truth, the guides of humankind, from the offspring of the Prophet and his designated successor..."
- Nasir Khusraw, Jami al-Hikmatayn (in Between Reason and Revelation by Eric Ormsby, p. 22)

Whoever is capable of transforming someone from an angel in potentiality to an angel in actuality has reached an angelic rank; he is God's representative on earth... It is for this reason that God has commanded us, after having faith in Him – glory be to Him – that we should have faith in His angels, His Book, and His emissaries; it is as He says,  ‘They all believe in God, His angels, His scriptures, and His messengers [Qur'an 2:285].'
- Nasir Khusraw, Jami al-Hikmatayn (in Between Reason and Revelation by Eric Ormsby, p. 130)