Why Did The Aga Khan Get Divorced? 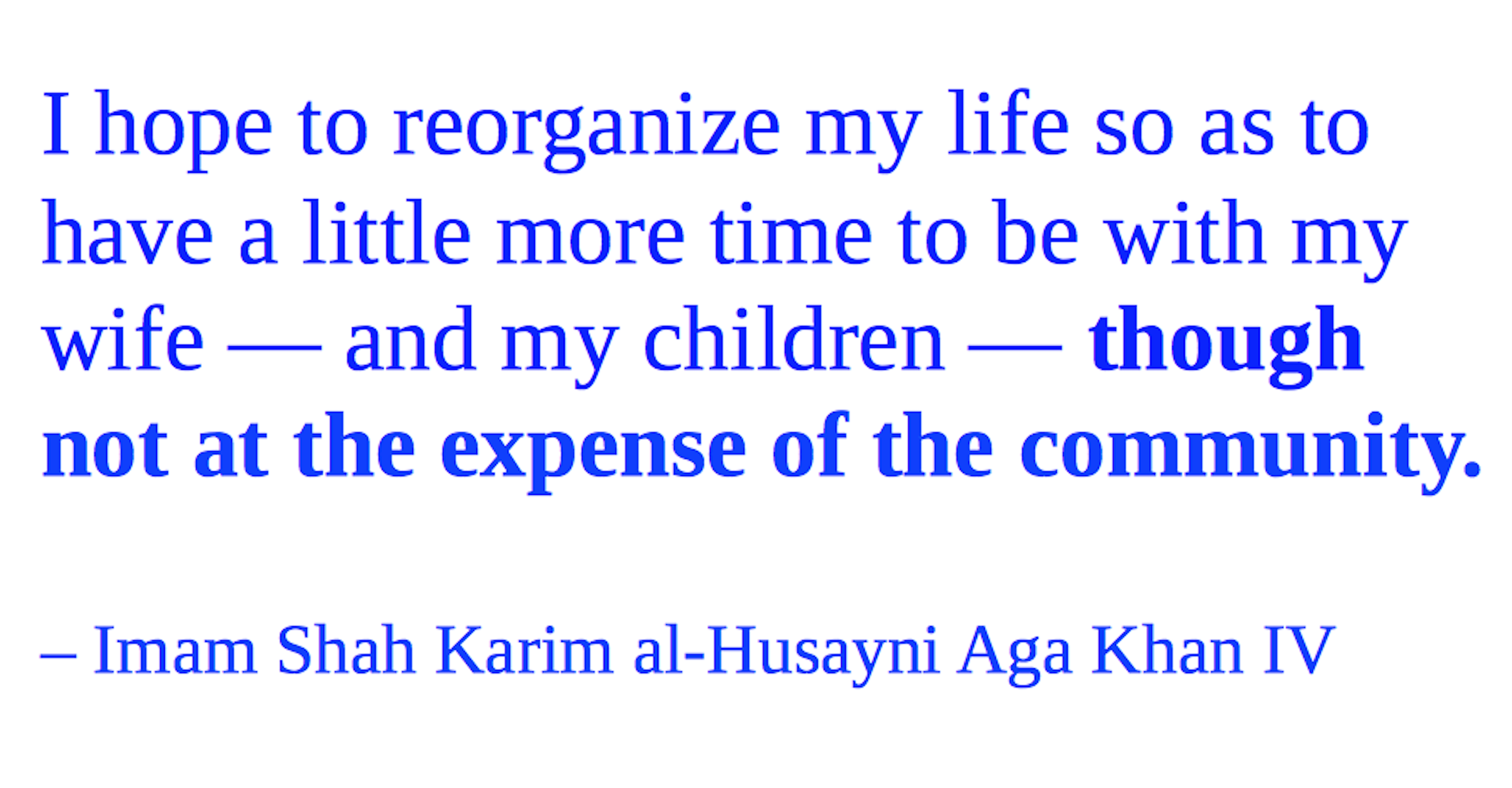 Imam Shah Karim al-Husayni Aga Khan IV has brought for the past 60 years — and continues to bring — spiritual, ethical, social, and material succour to the entire world through his tireless and selfless development work through the AKDN activities. The demands of the Imam’s mission and extensive work have also taken a toll on his family life. The Imam even makes his decisions on whom and when to get married to based on the well being of the Ismaili Muslim community. The Aga Khan even gives the Ismaili community greater priority in his life than his own wife and children. The Aga Khan’s biographer Willi Frischauer records the Imam saying the following when he married his first wife Begum Salima in 1969:

"I would not marry a woman who I did not believe could help me. I hope to reorganise my life so as to have a little more time to be with my wife — and my children — though not at the expense of the community."

In an interview given ten years after his first marriage, the Imam described how his spiritual and material responsibilities keep him away from seeing his wife and children:

AM: You have told me very little about your family?
Aga Khan: The burden of work and travel is very severe.  So although I am extremely fortunate to have a wonderful wife and children, I can’t spend as much time with them as I wish. But I hope to have more time for my family later on. (Interviewer: He said exactly the same on the eve of his wedding ten years ago).

Like all human beings on this earth - including the Prophets like Muhammad and Abraham - the Imam lives a full domestic life with all the problems and issues that marriage and family can bring to one's life. As reported in the Qur’an, even the Prophet Muhammad experienced domestic arguments with his wives. Many of the previous Shi'i Imams had several wives and went through divorce as well.

What is the Islamic View on Marriage and Divorce?

Imam Sultan Muhammad Shah Aga Khan III in his published Memoirs explains how in Islam, marriage is not a sacred or religious matter but solely a social contract between two people. Similarly, divorce in Islam is not a sin - in certain cases divorce is the best and proper course of action:

It is important that it should be realized among non-Muslims that the Islamic view of the institution of marriage - - and of all that relates to it, divorce, plurality of wives and so on -- is a question solely of contract, of consent and of definite and mutually accepted responsibilities. The sacramental concept of marriage is not Islam's; therefore except indirectly there is no question of its religious significance, and there is no religious ceremony to invest it with the solemnity and the symbolism which appertain to marriage in other religions, like Christianity and Hinduism. It is exactly analogous to -- in the West -- an entirely civil and secular marriage in a registry office or before a judge. Prayers of course can be offered -- prayers for happiness, prosperity and good health -- but there can be no religious ritual beyond these, and they indeed are solely a matter of personal choice….I have referred before to the differences between the Christian and the Muslim view of marriage and to the misunderstandings which arise. Whereas those brought up in the Christian tradition, with its sacramental concept of marriage, find it hard to understand the practical and contractual basis of the Islamic idea of marriage, for Muslims it is just as difficult to comprehend the laws in the West which compel the continuance of an unhappy marriage and insist on the artificial and arranged sin of adultery in order to bring to an end an association that has become insupportable and to permit both partners to make a fresh start in life.

From an Islamic point of view, it is utterly disrespectful to intrude and pry into the private domestic affairs of another Muslim and even more disrespectful to read about them and publicize them. But the British tabloid business has no other reason to exist except this - so we should not be surprised that the  Daily Mail and the Evening Standard - the sources of some of these allegations - make a living off this and have been slandering the Aga Khan for years. Any cursory reading of their articles will show that they lack practices that any serious piece of journalism has like footnotes, sourcing, date and time of statements, and coverage of all points of view both favorable and unfavorable.

We have seen the  Daily Mail post pictures and inaccurately label the figures in them. This is the same tabloid that was running articles about Justin Bieber and UFOs. The general point is that the Daily Mail and similar sources simply cannot be trusted as authentic sources of information — especially about the figure of the Imam of the Time whose role, history, and position are not even well understood by mainstream journalism outlets.

1. Concerning the divorce proceedings of the Aga Khan with his estranged wife Begum Inaara,  the French court overturned the previous ruling and cleared the Aga Khan of bearing responsibility for his second divorce and the Daily Mail conceded in another article that "the Paris Court had struck down all provisions of the Amiens court of appeal." However, the Daily Mail was clearly hesitant to admit this and would not even write a separate article to update the status of the divorce case. Instead, they merely mentioned this in passing in an article about Sarkozy and the Aga Khan. Divorce court proceedings are not about getting to the truth of a matter and are usually full of allegations and counter-allegations. Therefore, it is not methodologically appropriate to use tabloid reporting of divorce proceedings as a source of authentic information concerning the character of Aga Khan or to assess his status as the Imam of the Time. That being said, the most recent court ruling clearly absolves the Aga Khan of such allegations. The Ismaili Imam for his part gives no credence to tabloid reporting as he says:

"I am not affected by suggestions in print that I live a luxurious Western life, while most Ismailis live in underdeveloped Eastern countries. These are just smears by cheap magazines. Serious publications are aware of the work we do and of our achievements in many countries. Such smear stories never appear in Asian publications."

2. So many of the pictures of the Aga Khan circulating online are clearly doctored. Note the pictures below which show how the face of the Aga Khan was digitally superimposed on Hugh Hefner’s face, How Hillary Clinton was replaced by two other women, etc. — some person has obviously taken the trouble to do this and that is a reflection of their character and those who share such pictures: 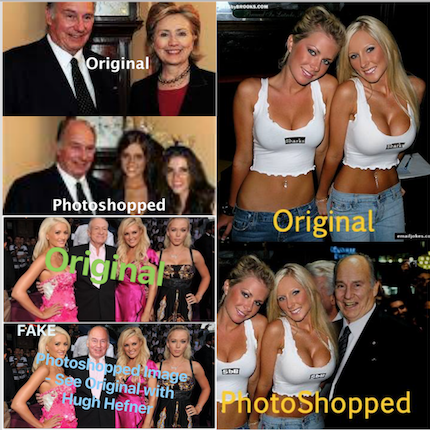 It should be further added that in Nizari Ismailism, as practiced today, there is no rule about women having to wear hijab or cover their faces. Men and women are allowed to mix freely, to socialize, to shake hands, etc. Much of the rules of social behavior in Muslim societies today are rooted in culture as opposed to faith. The emphasis in the Ismaili Tariqah is on behaving ethically toward one another and toward seeing other men and women as one’s fellow spiritual brothers and sisters.

3. As a final point, we would like to caution against adopting a method where one tries to verify their recognition of the Imam by assessing and scrutinizing each and every detail of his personal life. One problem with this approach is the lack of information sources – besides tabloids, there is nowhere to get the information. The second problem is the approach itself.  The Imam is not the Imam because he passed some sort of democratic moral/ethical test measured and graded by his followers and other onlookers. The Imam is the Imam because God inspires him with His Light and Spirit, and the two proofs that the Imam must have to be recognized as the Imam are 1) his lineal descent from the previous Imam and 2) the appointment or nass of the previous Imam (all documented here). These are the only two elements one should be assessing in the quest to recognize the Imam.

Putting the Imam to a test – a test of knowledge or a test of behavior – is a contradiction because the the seeker would be the one grading the Teacher on the test. And this act of assessing the Imam and determining his suitability is an implicit act of affirming one's own self as the Imam. After all, isn’t it the Imam alone who knows the best course of ethical and moral action for any given situation? In the parable of Moses and Khidr in the Qur’an Chapter 18 is a great illustration of how even the Prophet Moses was unable to fathom or judge or comprehend the purpose and meaning of the actions of Khidr – which appeared to be immoral and unethical to Moses’ eyes, but in reality, were quite righteous. If indeed, the Aga Khan has the nass and the lineal descent, then he IS the Imam and his behaviour, actions, words and deeds must be ma’sum (protected from sin) by definition because he is the Imam.

See this article for more details on how the Imam works tirelessly and selflessly to serve his community and the world at large, often using his personal wealth to fund AKDN and community programs:  https://ismailignosis.com/2015/08/02/the-secret-life-of-the-aga-khan/