"The veil for women is a tradition which precedes Islam, and was introduced as a sign of respect of women and not of submission, i.e. against the concept that woman is an object of the society of men."
– Imam Shah Karim al-Husayni Aga Khan IV,
(His Highness the Aga Khan's 2001,  Corriere della Sera interview with Massimo Nava (Italy) [Translation]

"The veil was not common in the Muslim empire until late in the 10th century, and was introduced to Muslims through their Persian conquest. In antiquity, only upper class Assyrian women were required by law to wear veils, while slaves and servants were explicitly forbidden from veiling. Muslims initially adopted the veil to represent social status; only later did the veil symbolize modesty. While the Islamic injunction to dress modestly has a wide range of interpretations, by the late 16th century, yashmak (veil) had become obligatory in the Ottoman empire."
– Muhammed Hassanali,  "Veil", International Institute for Asian Studies Newsletter, #41 (Summer 2006)

It seems that Nizari Ismailis abolished the veil and hijab in the 12th century and the same order was reemphasized in the 20th century by the 48th Ismaili Imam.

“I appeal to you not to plunge people into whimsical matters, denying women human values…. From now on, do not hide and cover women; educate them, do not pressurise them and do not marry except one wife, the same as I have only one.”
– Imam Hasan ‘ala Dhikrihi al-Salam (Spiritual Resurrection in Shi’i Islam Introduction by S.J. Badakchani, p. 28-29)

"I have always sought to encourage the emancipation and education of women. In my grandfather’s and my father’s time the Ismailis were far ahead of any other Muslim sect in the matter of the abolition of the strict veil, even in extremely conservative countries. I have absolutely abolished it; nowadays you will never find an Ismaili woman wearing the veil. Everywhere I have always encouraged girls’ schools, even in regions where otherwise they were completely unknown. I say with pride that my Ismaili followers are, in this matter of social welfare, far in advance of any other Muslim sect."
– Imam Sultan Muhammad Shah Aga Khan III, 'The Memoirs of Aga Khan -- World Enough and Time', Chapter 2: Islam, The Religion of My Ancestors, 1954 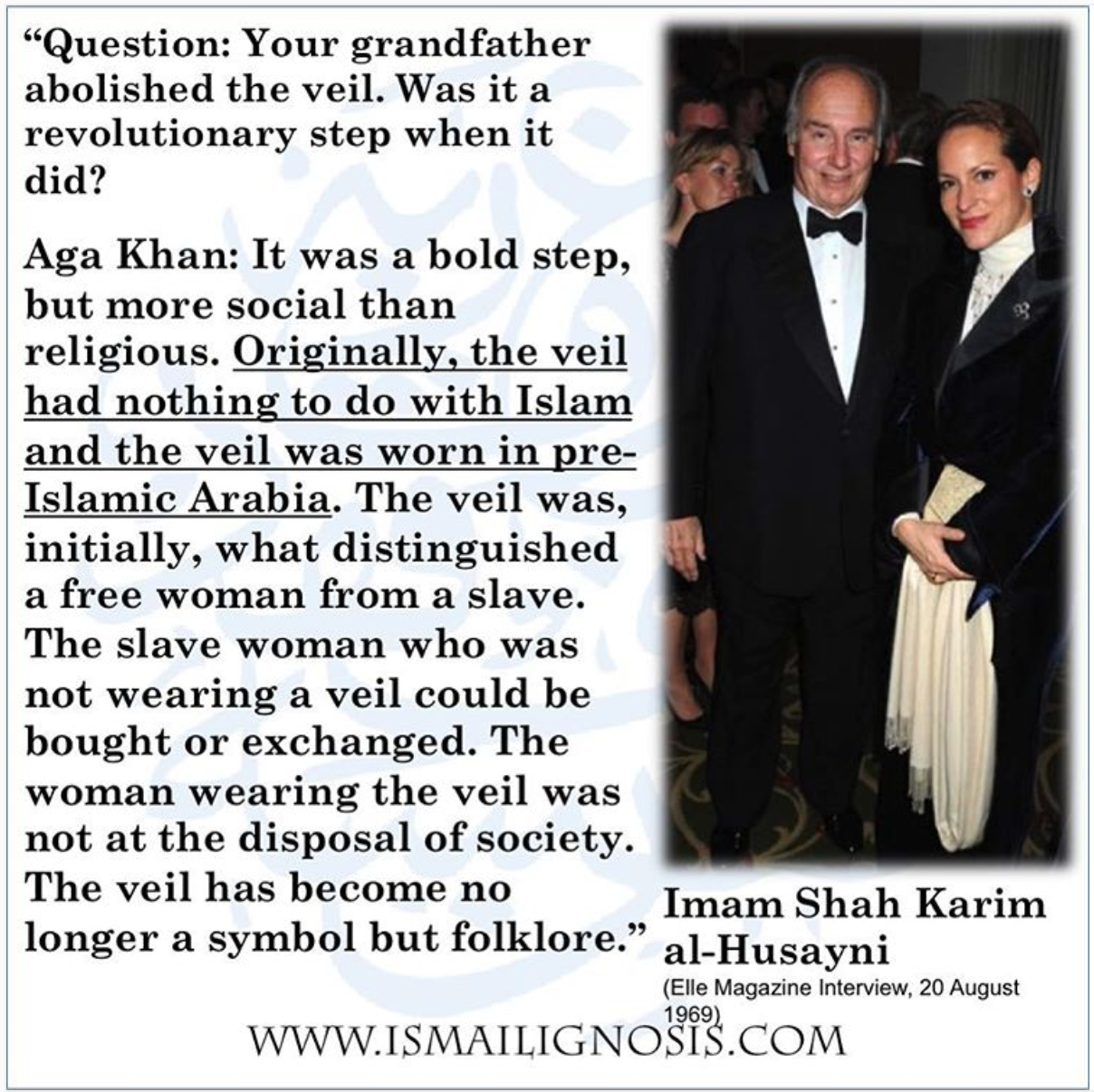 In 1905, Imam Sultan Muhammad Shah gave guidance to his community in Zanzibar about how the veil of the heart would be better for them than the external burqa (veil). 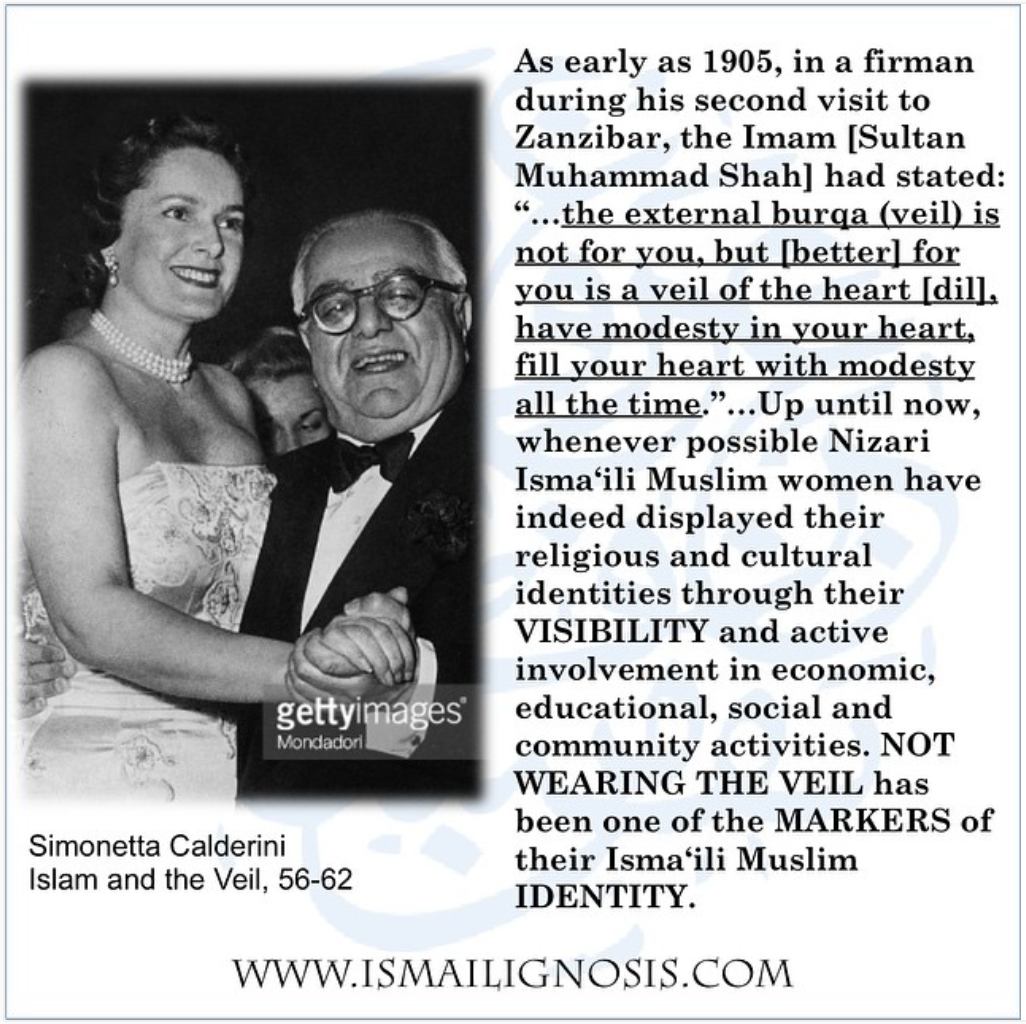 " A second cause of our present apathy is the terrible position of Muslim women... There is absolutely nothing in Islam, or the Qur'an, or the example of the first two centuries, to justify this terrible and cancerous growth that has for nearly a thousand years eaten into the very vitals of Islamic society...."

"... the Abbassides, borrowing from the practice of the later Persian Sassanian kings, developed the present system ... which means the permanent imprisonment and enslavement of half the nation. How can we expect progress from the children of mothers who have never shared, or even seen, the free social intercourse of modern mankind? This terrible cancer that has grown since the 3rd and 4th century [sic] of the Hijra must either be cut out, or the body of Muslim society will be poisoned to death by the permanent waste of all the women of the nation. But purdah, as now known, itself did not exist till long after the Prophet's death and is no part of Islam. The part played by Muslim women at Kardesiah and Yarmuk the two most momentous battles of Islam next to Badr and Honein, and their splendid nursing of the wounded after those battles, is of itself a proof to any reasonable person that purdah, as now understood, has never been conceived by the companions of the Prophet. That we Muslims should saddle ourselves with this excretion of Persian custom, borrowed by the Abbassides, is due to that ignorance of early Islam which is one of the most extraordinary of modern conditions."

However, it should be clarified that even though the contemporary Ismaili Imams have discouraged Ismaili women from wearing the veil and have argued that the veil is no part of Islam, in the spirit of pluralism, theyacknowledge and uphold the right of those belonging to other interpretations of Islam to "associate publicly with a faith". However, there should be no compulsion in such a matter:

"My own sense is that if an individual wishes to associate publicly with a faith, that's the right of that individual to do that, whether he's a Christian or a Jew or a Muslim. That is, to me, something which is important. To go from there to an imposed process by forces in society, to me is unacceptable. It's got to be the choice of the individual who wishes to associate with his faith or her faith. I have great respect for any individual who wants in the right way to be associated with his own faith. I accept that totally and I would never challenge it."

Also see this post by NanoWisdoms where the contemporary Ismaili Imams explain their views on the matter: