Should Faith be Blind or Based on Logic?

“You must have in every walk of your life a LOGICAL concept. This does not mean to wipe away faith, but the real principle of Islam is that FAITH IS LOGICAL. Islam would not be what it is if it were not LOGICAL and this is something you must keep in mind. Because the very HEART OF ISLAM IS LOGICAL. There is NO HOCUS-POCUS. There is no nonsense. It is clear and it is lucid and it is understandable, and for those of you who have studied it closely, this will be the first thing apparent to you.” (emphasis added)
– Imām Shāh Karīm al-Ḥusaynī Āgā Khān IV, Speech to Students, Karachi, September 27, 1960

"The Divine Intellect, Aql-i Kull, both transcends and informs the human intellect. It is this Intellect which enables man to strive towards two aims dictated by the faith: that he should reflect upon the environment Allah has given him and that he should know himself. It is the Light of the Intellect which distinguishes the complete human being from the human animal, and developing that intellect requires free inquiry. The man of faith, who fails to pursue intellectual search is likely to have only a limited comprehension of Allah’s creation. Indeed, it is man’s intellect that enables him to expand his vision of that creation."
– Imām Shāh Karīm al-Ḥusaynī Āgā Khān IV, AKU Convocation Speech, Karachi, Pakistan, November 11, 1985

The idea that religious belief — especially belief in the existence of God — is "based on faith" and not reason, or "just comes down to belief" is really not true. Only certain Christian Protestant thinkers and communities think this way. Most of the Christian tradition and the entire Islamic tradition believe that all fundamental religious beliefs (usul al-din) - like God, Prophethood, Imamat, the Soul, etc. must be proven by logic, reason, and evidence so the human intellect has conviction in them. 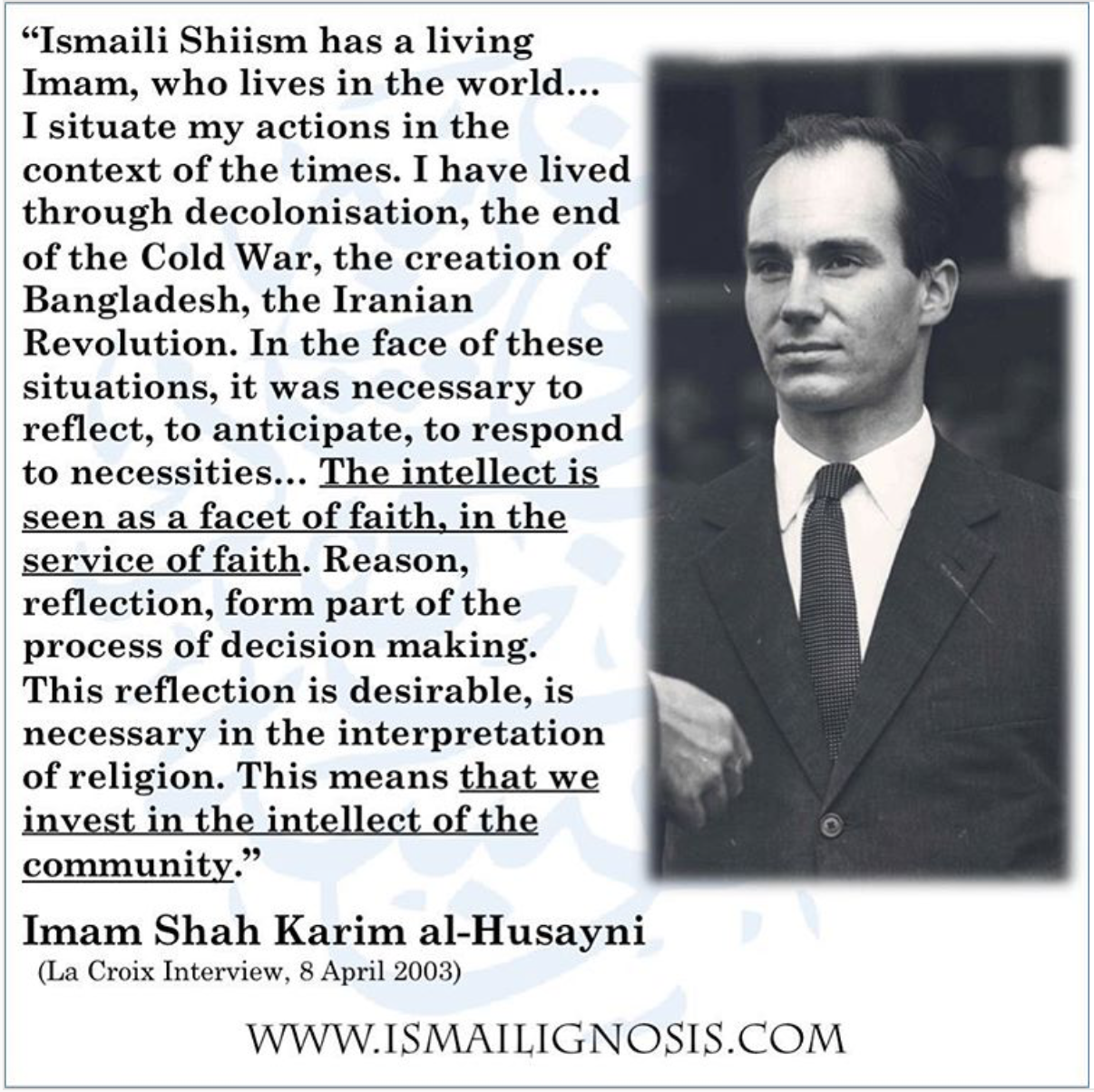 The 48th Imam of the Ismailis, Sir Sultan Muhammad Shah, was clear that he wanted his followers to intellectually validate their faith when he said at a religious conference that he “did not want somebody to be Ismaili because his father was Ismaili.” (Ismaili Education in Africa, A.M. Sadaruddin, Zahur)

One Ismaili philosopher, Abu Hatim al-Razi, says the following about how it is forbidden to "blindly imitate" in matters of religious belief: