What Happens to the Soul After Death?

The Farmans of the Imams and the Qur'an offer very little in concrete expressions about what happens to the soul after death - this is because, among other things, the reality of the afterlife cannot be contained in human language, concepts and images. So all scriptures, religious authorities and thinkers have exercised caution when speaking about this topic. Nasir al-Din al-Tusi, the famous Ismaili Muslim philosopher of Alamut, wrote in a preface to his book dedicated to the topic of the Hereafter:

In keeping with Tusi's caution and spirit, the following are basically interpretations and formulations of the material on the afterlife through an engagement with Islamic sources - from the Ismaili tradition, the Islamic falsafa tradition, and wider Sufi tradition.

The spiritual world itself can be further subdivided into levels - like different degrees of "light" with various intensity levels. 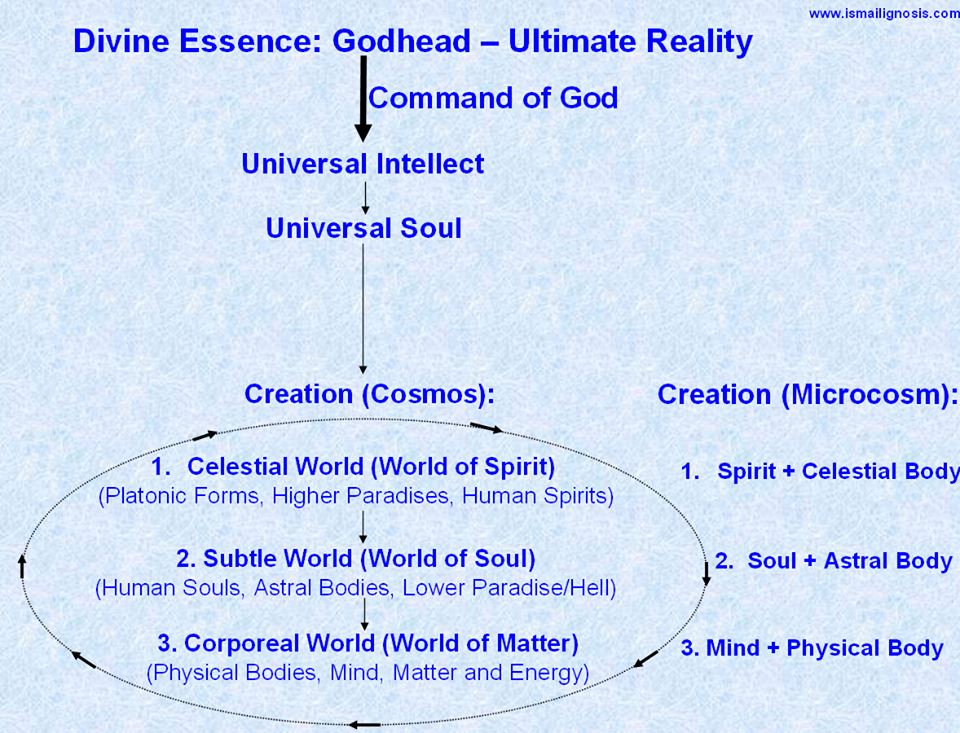 In between, there are numerous levels, and each level is like its own "world" and only God knows the innumerable realms and worlds between physical reality as we know it and the highest Universal Intellect. God Himself, in the classical Ismaili perspective, occupies no "level" as He is too great to be limited to any level and His single Command - which keeps everything in being - also encompasses all these levels and worlds.

So within this worldview, there exists a "psychology" - a model of the human self - which envisages the human being as consisting of a physical body, an immaterial soul, and an intellect (also called spirit). But the main idea is that the essence of each person is his or her soul and this soul is not a material entity, it is a spiritual (ruhani) substance (jawhar) - and as such, the soul does not take up any space; it is not "inside" the body or "inside" the brain. This human soul, one could say, belongs to its own spiritual world [a world beyond space, place, matter] among other souls. This spiritual world - and the souls that populate it - is, from the human perspective, everywhere and not restricted to a location. That being said, when the soul is "embodied", this really means that the soul is "projecting" itself into the physical world upon a particular material body that is prepared with the capacity to receive the activity of the soul [in the human case, it requires a functioning brain] - such that the soul can control, express, act, and manifest itself through this body.

“Human souls, being eternal, do not themselves mix ‘in person’, so to speak, with the world of material and accidental things, which are temporal. It is their silhouette, their Image, their shadow, which is projected into it.”
– Henry Corbin, (Spiritual Body, Celestial Earth, 80)

So then what happens after physical death? The Ismaili philosophers as early as al-Nasafi and Sijistani, the Sufi thinkers, some Islamic philosophers, and many later Islamic theosophers like Mulla Sadra and his successors - all of them describe and speak of a world or realm that stands "in-between" the physical world and the spiritual realm where human souls dwell. This "in-between" world is given many names like the World of Images ( Mithal), or the World of Imagination (Khayal), or the Intermediary (barzakhi) World. But the general idea is that this Imaginal World is less dense than the physical world but more dense than the purely spiritual world. Practically, this means that the Imaginal World consists of spiritual realities - one could say consciousness experience - but expressed through images. It sort of looks similar to what is experienced in dreams - in dreams, things have a sort of bodily form, including the self as the dreamer, but these are not physical bodies, they are subtle or imaginal bodies.

“God created the world of archetypal images as an intermediary (barzakh) linking the World of Spirits and the World of Bodies... In short, this is the world of archetypal Images through and in which Spirits are corporealized and bodies spiritualized.  Through and in this world, ways of being and moral behavior are personalized, and suprasensory realities are manifested in the forms and figures with which they symbolize… It is in this intermediate world that the Holy Imams are present when they appear before a dying person, as related in so many traditional accounts.  This is the world in which the interrogation of the tomb takes place, with its delights and its torments; and it is in this intermediate world also that the faithful believer can visit those near to him after their death.”
– Fayd al-Din Kashani,  (Quoted in Henry Corbin, Spiritual Body and Celestial Earth, 178)

This is important because various sources - including the early Imams, the Hadith, the philosophers, the mystics, Near-Death experiences and even hints in the farmans - say that upon death, the human soul projects itself in this Imaginal World or Intermediary World, and in that world, the soul takes the form of an "imaginal body" or "subtle body". This is again, similar to a dream - where one has "a body" in their dreams but it is not their physical body. Similarly, in the Imaginal World - which is the world of the hereafter - the soul has an imaginal body. And this imaginal body is something that the immaterial soul "projects" in order to manifest and act and experience things in this Imaginal World. When the physical body is alive, the soul projects the imaginal body upon the physical body - and there is waking consciousness as a result. When the physical body can no longer receive the projection of the soul, then the soul continues to "project" but now the projection exists on its own - as an imaginal body - without a physical locus. The imaginal body and what it perceives in the Imaginal World is all an "image" of the state of the soul. If the soul has certain bad or negative qualities - caused by bad deeds, bad intentions, character flaws, etc. - then it will perceive these negative things in the form of images in the Imaginal World. And the same goes for the beautiful traits, meritorious deeds and intentions - it will perceive them in the Imaginal World through pleasant and beautiful images. But these images will seem very real - they are actually more real and more vivid than anything that is perceived in this physical world.

Nasir al-Din Tusi explains it best where he says below how the human soul continues to exist in an imaginal body through which it experiences things in the Hereafter:

“ When the soul departs from the body, it retains a kind of imaginal body (hay’at az khayal), bearing the forms of whatever the imaginal soul knew or did. Likewise, reward and punishment are determined for the human soul in proportion to that imaginal body, and the imaginal soul reminds it of this reward and punishment. The identity of human souls in the Hereafter (akhirat) is determined by this, because in this world human beings are spiritual beings clothed in corporeal bodies, while in the next they are corporeal beings clothed in spirituality.”
– Nasir al-Din Tusi, (The Paradise of Submission, 34)

“The notion entertained by some folk that the soul upon separation from the body in that world has no concrete individual identity or distinguishing characteristic is incorrect. It is false because the soul’s activity and comprehension in this world requires the participation of the faculty of imagination (quwwat-i khayal), which acts as an intermediary between the corporeal and the spiritual faculties. After the soul leaves the body, an imaginal body remains with the soul. Just as in this world when a person dreams, he sees different circumstances through the mediation of the imagination and physical sight, so too in the Hereafter, the spirits see different things and situations through the mediation of the imaginal body (hay’at-i khayal), and they become aware of their own condition and the condition of others as well.”
– Nasir al-Din Tusi, (The Paradise of Submission, 86)

Does this match what the Qur'an says?

The Qur'an refers to what happens after death as "resurrection" or "arising" ( qiyamah, ba'ath). For the individual human soul, there are two levels or types of "Rising": Minor Arising and Major Arising. The Minor Arising or Minor Resurrection (qiyamat al-sughra) occurs when the human soul "arises" from the physical body into the imaginal body. Sometimes, the Hadith Literature allegorically describes the human soul in the Imaginal Body as "spending time in the grave." The "grave" here does not refer to the physical grave of mud and dust; the "grave" refers to the Imaginal Body itself. When the human soul in the Imaginal Body has succeeded in completing its spiritual growth and purifying itself, it will move to an even higher level called the Celestial Body or Paradiscal Body. This occurs when the human soul ascends from the Imaginal Subtle World to the Celestial Spiritual World (see diagram above) and this is "Entering into Paradise." In Qur'anic terms, the movement of the soul from Imaginal Body to Celestial Body is the Major Arising or Major Resurrection (qiyamat al-kubra).

“In Mulla Sadra’s view, the body that is resurrected in the posthumous state is the subtle or imaginal body. It is the imaginal body that must grow to maturity in the posthumous state and eventually experience another death which is also a birth. It is the death to the intermediate imaginal world and a birth into the spiritual or intelligible world.  The creation of the imaginal body by the soul constitutes the lesser resurrection (qiyamah sughra) and the creation of the spiritual body, the greater resurrection (qiyamah kubra).  Therefore the human soul experiences three births and three modes of existence.”
– Zailan Morris, (Revelation, Intellectual Intuition and Reason, 114)

What about Near-Death Experiences?

Modern day Near-Death-Experience literature seems to confirm the existence of the imaginal body – the very same experience that the Muslim thinkers and mystics described hundreds of years ago. For example, two studies on NDEs state:

“Most people say they are not just some spot of consciousness when this happens. They still seem to be in some kind of body even though they are out of their physical bodies.  They say the spiritual body has shape and form unlike our physical bodies.  It has arms and a shape although most are at a loss to describe what it looks like.  Some people describe it as a cloud of colors, or an energy field.”
– Raymond Moody, (The Light Beyond, 15)

“An important characteristic of the early OBE (Out of Body Experience) studies is the fact that the explorers tended to experience their out-of-body consciousness as lodged in the ‘astral body’. This second body is understood to be ordinarily coterminous with the physical, but emerges from it during OBEs. It appears to the OBEr as identical to the physical but is invisible to most people; it can float or glide through the air, move through walls, and can visit other planes than the physical. Normally it is linked to the physical body by a line called the ‘silver cord’ (a reference to Ecclestiastes 12:6).
– Gracia Fay Ellwood, (Holy Darkness: Holy Light, PhD Dissertation, Claremont Graduate University, 42)