Why Does Hazar Imam spend so much of his time doing AKDN work?

To the Imamat, the meaning of  “quality of life” extends to the entire ethical and social context in which people live, and not only to their material well-being measured over generation after generation. Consequently, the Imamat’s is a holistic vision of development, as is prescribed by the faith of Islam. It is about investing in people, in their pluralism, in their intellectual pursuit, and search for new and useful knowledge, just as much as in material resources. But it is also about investing with a social conscience inspired by the ethics of Islam. It is work that benefits all, regardless of gender, ethnicity, religion, nationality or background. Does the Holy Qur’an not say in one of the most inspiring references to mankind, that Allah has created all mankind from one soul? Today, this vision is implemented by institutions of the Aga Khan Development Network.
– Imam Shah Karim al-Husayni Aga Khan IV,
(Alltex EPX Limited Opening Ceremony, Kenya, December 19, 2003:  Read Here)

The Aga Khan Development Network (AKDN) is a group of development agencies established by the  contemporary Ismaili Imamat over the last 100 years; the Network operates in over 35 countries, employs over 80,000 people and 100,000 volunteers, and spends over $600 million dollars annually to raise the quality of life of all people in need, regardless of faith, culture or ethnicity. The AKDN accomplishes this through numerous activities in poverty relief, healthcare, economics, education, health services, architecture, agriculture, cultural restoration, tourism, etc. The roots of the AKDN go back to the first Khoja Ismaili school established by Imam Aga Ali Shah Aga Khan II in Bombay and the first Aga Khan Schools created in Zanzibar by Imam Sultan Muhammad Shah Aga Khan III. As explained by Imam Shah Karim al-Husayni Aga Khan IV, the work of AKDN is not mere philanthropy – because philanthropy is voluntary, as a choice. On the contrary, the AKDN’s work is a sacred obligation of the Ismaili Imams based on the very definition of their Imamat stemming directly from the ethics of Islam:

I am fascinated and somewhat frustrated when representatives of the Western world — especially the Western media — try to describe the work of our Aga Khan Development Network in fields like education, health, the economy, media, and the building of social infrastructure.  Reflecting a certain historical tendency of the West to separate the secular from the religious, they often describe it either as philanthropy or entrepreneurship. What is not understood is that this work is for us a part of our institutional responsibility — it flows from the mandate of the office of Imam to improve the quality of worldly life for the concerned communities.
– Imam Shah Karim al-Husayni Aga Khan IV,
Acceptance Address, Tutzing Evangelical Academy’s Tolerance Award, May 20, 2006:  Read Here)

The below diagram illustrates how all of the AKDN’s agencies – such as the Aga Khan Foundation, Aga Khan University, Aga Khan Trust for Culture, Aga Khan Academies, and Aga Khan Fund for Economic Development – are enactments and translations of Islamic ethics into institutional action. 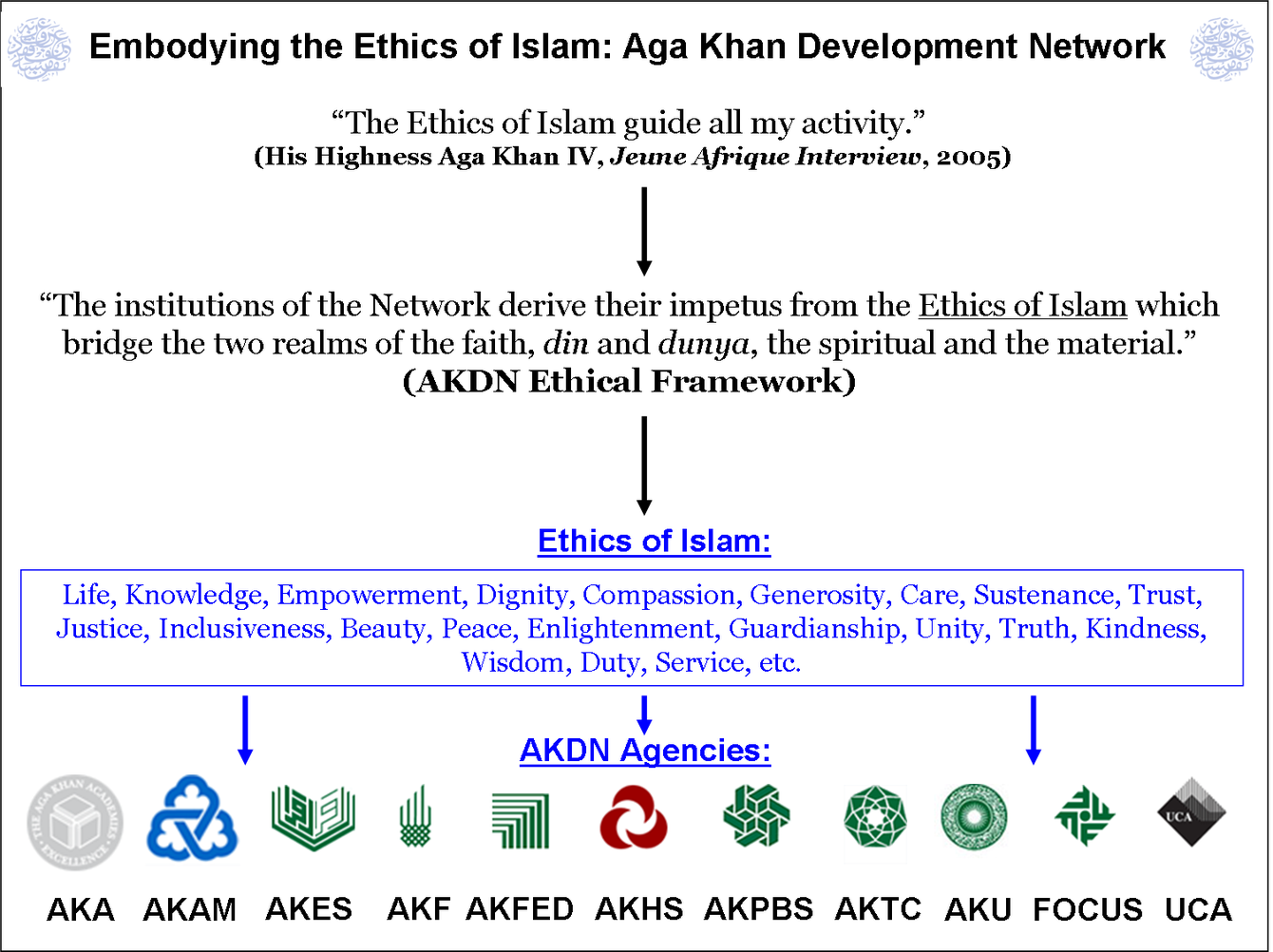 The ethics of Islam enjoin all believers, individually or through institutions such as the Ismaili Imamat, to assist the poor, the isolated, and the marginalised to improve their current circumstances and future prospects.Through the Imamat, I have tried to respond to this responsibility by creating a group of private, non-denominational agencies the Aga Khan Development Network – to respond to the needs and potential of people living in some of the poorest parts of the world, irrespective of their gender, ethnicity, or religion.
– Imam Shah Karim al-Husayni Aga Khan IV,
(World Mountain Forum UNESCO, Paris, France, June 5, 2000)

The foundations of the Ismaili Imamat’s work being accomplished today through the Aga Khan Development Network were established and prophecised 1400 years ago. Numerous reports ( ahadith) of the Prophet Muhammad in both Sunni and Shi‘a collections describe how one of Prophet Muhammad’s direct descendants would establish justice in the world and rid the earth of all injustice, oppression and poverty. The Prophet Muhammad refers to his future descendant, in the line of Imam ‘Ali ibn Abi Talib and Hazrat Fatimah (the Prophet’s daughter), as a member of his Ahl al-Bayt and describes him as follows:

If only one day of this world remained, God would raise up  a man from my Ahl al-Bayt who would fill the earth with justice as it has been filled with oppression.
– Prophet Muhammad, (Sunan Abu Dawud, Book 37, Hadith No. 4270:  http://sunnah.com/abudawud/38/5)

Imam Shah Karim al-Husayni Aga Khan IV, as the founder of the Aga Khan Development Network, is today fulfilling the mission of the promised Mahdi foretold 1400 years ago by his own ancestor, Prophet Muhammad. Even though the Ismaili Imams endured great persecution over the last thousand years, the period of persecution has passed and the Imams, as per the Prophet’s own promise, are now engaged in bringing justice and equity to the world through the Aga Khan Development Network. Below is a list of some of the AKDN’s accomplishments to this end, followed by a special AKDN video describing them: