Why do Ismailis celebrate Nawruz? An esoteric explanation of the ancient festival 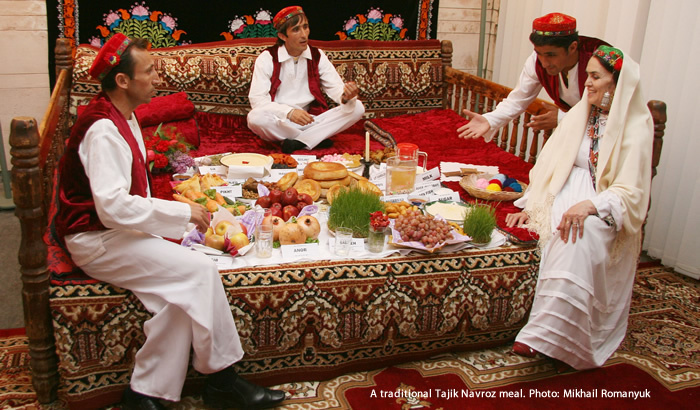 "Now let us see with insight what the reality of this example of Naw-ruz is and what the spiritual Naw-ruz festival is for the true mu’mins? It is important to consider this question because every festival, religious or worldly, cannot prove to be the real and spiritual festival if it only provides more and more means of physical happiness. Therefore, it is necessary for it to be a spiritual festival simultaneously with it being a physical one, as it is reported in a famous Hadith, that Allah has founded the basis of His religion on the pattern of the physical world (khalq), so that this may be a guide towards His religion and His religion to His oneness.

The description of the religious spring and the real Naw-ruz festival is that, just as the sun is in the centre of the universe and does not move from its place, the eternal light of the Imam of the time is always in the same state and does not change at all. Further, just as the different parts of the planet earth due to its daily and annual movement pass through light and darkness and become close to or far from the sun and due to which the changes in day and night, and seasons of spring, summer, autumn and winter continue, and as in the Arctic, the Antarctic and in many other deserts of the planet earth the question of habitation, season of spring and the Naw-ruz festival does not arise at present, in the same way there is still time for the light of Imamat to shine on some human souls. Further, just as in certain regions of the planet earth, due to their being on the equator or close to it, plants do not become dormant, in the same way there are certain mu’mins in whose heart the heat of devotion and love for the Imam of the time always remain and the flowers of spiritual happiness always bloom. This example of the beneficence of the light of Imamat is according to the physical and spiritual position of the select and the common.

The physical significance and beneficence of the Imam of the time in this connection are note-worthy; for instance, that the example of the light of Imamat and the human souls, which is given by the sun and the planet earth is true, but the sun does not have a choice, while the Imam has absolute choice. Therefore, we want to explain further that suppose a great and wondrous mirror is set up on the surface of the earth. This mirror shows the luminous reflection of the world-illuminating sun wherever it turns its face and there it cases the happiness of Naw-ruz and the cheer of spring. This is the example of the Imam of the time, because with respect to his corporeality he is the mazhar of the Divine favours and blessings and mirror of the eternal light. It is because of this that the spiritual season of the Ismaili worlds always remain temperate and extremely pleasant and there is always spring in them. Thus the real Naw-ruz festival is found in the individual spirituality of mu’mins. That is, every sincere mu’min’s initial spiritual progress is his Naw-ruz festival, in the sense that when the mu’min truly obeys the light of Imamat, the personal world of his heart, due to spiritual vegetation and prosperity, becomes like the garden of Paradise."