What is the meaning of Nandi offered in Jamatkhana?

"The word  nandi is corrupt form of nadi, whose original form is na'd in Arabic, meaning to call. The word nida means auction. The word na'd is used 29 times in the Koran. Another view suggests that the nandi is a Hindi word meaning blessing. It is a form of mehmani, and entertainment to the Imam. Nandi is an Islamic practice to offer food etc. to the Imam. It is an oblation presented in Ismailism. When asked about "the best part of Islam," the Prophet said, "offering food and extending greeting of peace (tut'im al-ta'am wa tarqa al-salam) to those you know and those you do not know" (Bukhari, 16:12). Asked about the meaning of a "righteous pilgrimage (hajj mabrur), the Prophet replied, "offering food and speaking kindly" (it'am al-ta'am wa-tib al-kalam), vide Ihya Ulum al-Din (2:16). According to Daim al-Islam (p. 330), "When people provide food (ma'ida, pl. mawa'id) or feasts for the progency of the Prophet, the angels surround them and glorify the Lord and ask for the pardon of those that partake of the meal."

The practice of the Nandi or Na'di seems to have emerged in the Indian Ismaili tradition during post-Alamut period. In those days, when the Pirs, vakils or any visitors travelled in Iran from India, the followers gave them many items to be presented to the Imam, known as nazar or khidmati. It was a symbolic present of any value offered to the Imam with appropriate forms to signify the devotion and love of the person offering it. The value of nazar (offering) ranged from a coconut to that of precious jewels. The practice of nazar became well established among the people of all walks of life in India that the food, fruits, grains, furniture, jewels, etc. were presented. Since it was not possible to take away these items in the long tedious journey, it seems to have been decided to get them disposed off, and its proceeds were remitted to the Imam for earning blessings (nandi). Many items were thus auctioned in those days in the house of an elder person residing close to the Jamakhana."

"Nandi is a Sanskrit word which is defined as: 'joy, satisfaction, delight; prosperity and praise of a deity at the commencement of a religious rite or observance,* (The Practical Sanskrit-English Dictionary 1976:541). By and large, the Nandi which is brought to Jama''at Khana is prepared by women and is categorized as follows:

(a) Darbari (food which is placed on the pats of Mukhi/Mukhyani).
(b) Sufro is especially prepared for ceremonial occasions and mortuary rites.
(c) Memani, food set aside from the meal prepared for the family.

Exegetical material reveals that Nandi is in essence food offered to the Imam out of love and devotion...We also learn from a Glnan that:

In the Ismaili tradition, it is through the Imam that the soul can return (ma’ad) to its origins. By making food offerings to the Imam, Ismailis are seeking to impart a cosmic dimension to their cooking that is identification with the homogenous state of communitas and the flow experience where the self (ego) becomes irrelevant…

The ceremony of Nandi is performed after prayers, when the congregation disperses. At this time, it is assumed that Memani offered to the Imam in a spiritual sense has been completed, and that food on the pat has to be distributed. The method used is 'bidding'. A member of the Jama’at who performs the ceremony takes each plate from the pat and names a price. The highest bidder gets the dish. As Nandi includes a variety of foods ranging from savoury and sweet dishes to fruits and milk, a number of participants are involved in 'purchasing' a dish and taking it home. Once a participant has obtained a dish, it is never replaced on the pat but is kept on the floor. This is significant as Nandi once taken from the pat no longer remains part of the context in which it is infused with cosmic significance. In other words, Nandi on the pat contains a greater intensity of sacredness compared with the Nandi which an individual takes home.

There is yet another context where the diffusion of sacredness is confirmed. If we maintain that social life and ritual life are two different orders of reality, then Nandi belongs to both. This is because when Nandi is brought to Jama'at Khana, it is considered to be sacred. When it is taken from Jama’at Khana by individuals, it becomes part of their material and social life. Here, an attempt is made to infuse the flow experience of unity into the mundane structure of everyday life. Nandi is never categorized as 'ordinary food'. It maintains its sacred character, the intensity of which varies and can be perceived in the form of 'movement'. The 'movement' of Nandi from the material world (most of the cooked Nandi is prepared in Ismaili homes) into the spiritual one of Jama'at Khana and back into the material world can be illustrated as follows:" 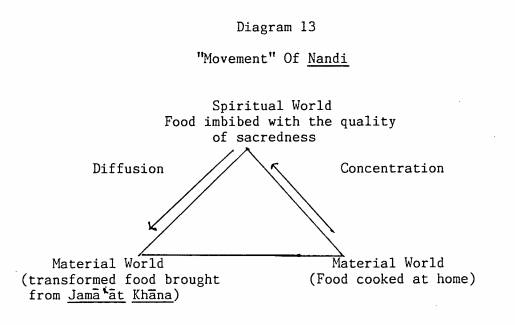