Are Women Second-Class Citizens in Islam? The Spiritual Status of the Feminine in Ismailism

"At the time Islam began, the conditions of women were terrible – they had no right to own property, were supposed to be the property of the man, and if the man died everything went to his sons.  Muhammad improved things quite a lot. By instituting rights of property ownership, inheritance, education and divorce, he gave women certain basic safeguards. Set in such historical context the Prophet can be seen as a figure who testified on behalf of women’s rights."

Before Muhammad began his prophetic mission, women in 7th century Arabia had little in the way of rights and were not considered persons. Muhammad and the Qur’an (2:228, 4:19, 4:1, 33:35), explicitly recognized the spiritual equality of men and women as persons under God (in contrast to the literal teachings of Confucius and the Bible).

The Qur'an outlawed female infanticide (81:8) and also granted women the right to:

In contrast, Western Europe only started granting women rights to property and personhood in the 18th century; America and British Commonwealth recognized women as persons with equal rights in the 19th-20th century.

The Qur'an, as it was revealed by Prophet Muhammad in his time, went to great lengths to drive home the point that women and men are equal in their standing before God:

Not only does it say that both are equal in the sight of God, but the Qur'an also put into place mechanisms for the protection of women:

"...the Quran specifies the harsh punishment of eighty lashes for all false or unsubstantiated accusations of sexual misconduct made against women in particular (24:4–5). In establishing this strong sanction, the Quran is concerned with...protecting those members of society, namely women, who might be most unjustly vulnerable to such slander."

The present and living 49th hereditary Ismaili on the status of women in Islam: 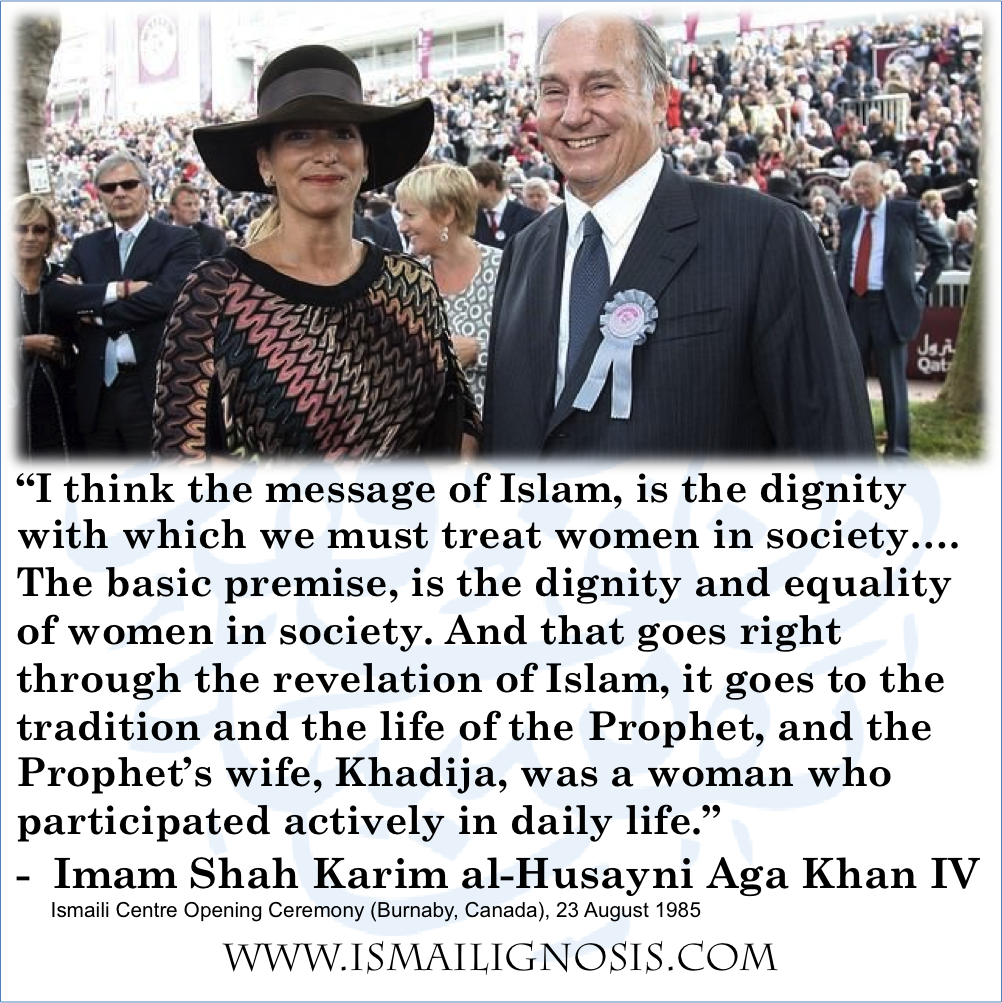 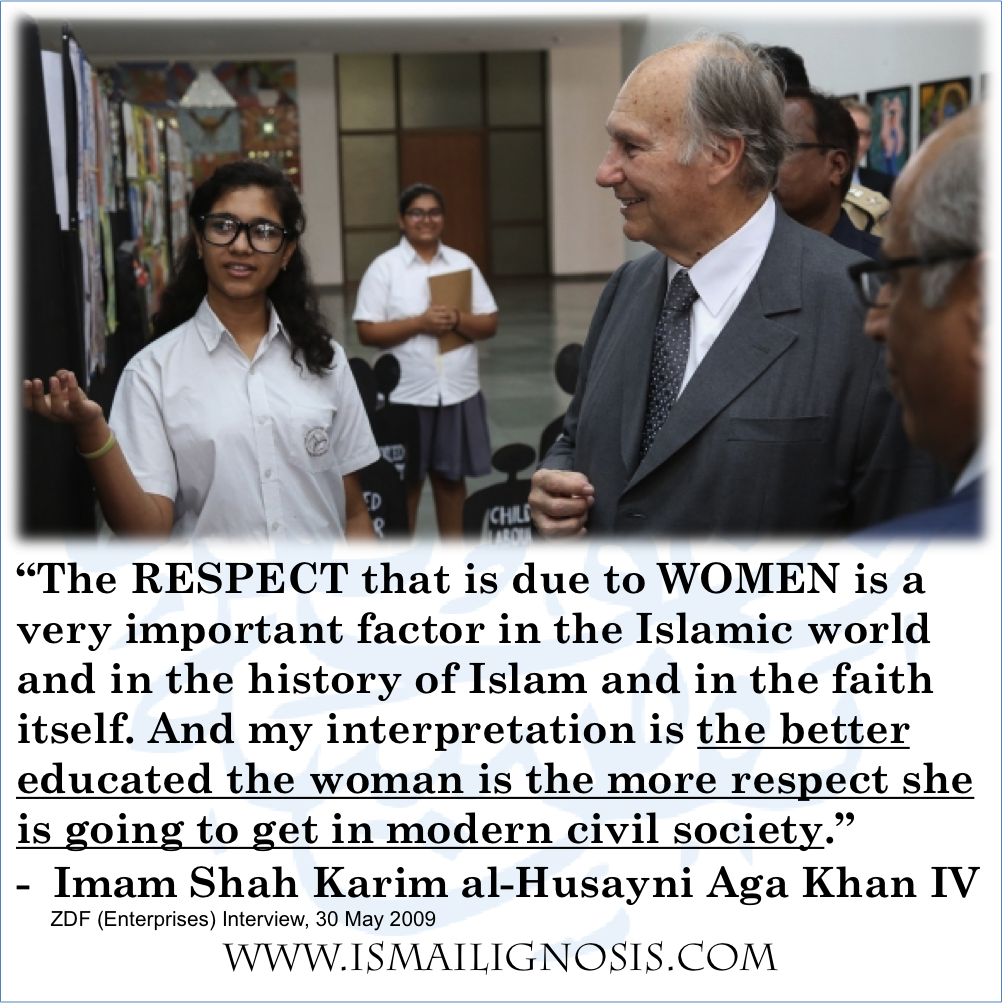 From the Oxford Dictionary of Islam:

"In Islam, men and women are moral equals in God's sight and are expected to fulfill the same duties of worship, prayer, faith, almsgiving, fasting, and pilgrimage to Mecca. Islam generally improved the status of women compared to earlier Arab cultures...

The historical record shows that Muhammad consulted women and weighed their opinions seriously. At least one woman, Umm Waraqah, was appointed imam over her household by Muhammad. Women contributed significantly to the canonization of the Quran. A woman is known to have corrected the authoritative ruling of Caliph Umar on dowry. Women prayed in mosques unsegregated from men, were involved in hadith transmission, gave sanctuary to men, engaged in commercial transactions, were encouraged to seek knowledge, and were both instructors and pupils in the early Islamic period....

The status of women in Islam according to the 48th Ismaili Imam:

"The Prophet of Islam (who has been so cruelly libeled in the Western world, by ignorance or malice) was one to say that men can but follow in the footsteps of their mothers towards Paradise. And it was not for nothing, according to Muslim belief, that his first convert was a woman.

Biologically the female is more important to the race than the male. While average women are capable or earning their own livelihood like men, they are the guardians of the life of the race, and only through their natural constitution are they able to bear the double burden.  Experience shows the strong probability that the active influence of women on society, under free and equal conditions, is calculated not only to bring about practical improvement in the domestic realm, but also a higher and nobler idealism into the life of the State. Those who know Muslim society from within readily admit that its higher spiritual life owes a great debt to the example and influence of women. Today, as in the lifetime of the Prophet, probably the majority of devout and reverent followers of His teaching are women.

No progressive thinker of today will challenge the claim that the social advancement and general well-being of communities are greatest where women are least debarred, by artificial barriers and narrow prejudice, from taking their full position as citizens.

The progressive modernization which depends on co-operation and understanding will be impossible unless women are permitted to play their legitimate part in the great work of national regeneration on a basis of political equality.”

In an inspiring message to the women of Pakistan over 60 years ago, Imam Sultan Muhammad Shah Aga Khan III clearly explains the equal status of women and men in society and proceeds to tell women to agitate for their equal rights:

“Only the other day, the Minister of Wakfs, one of the leading “Ulemas” of Egypt responsible for, religious affairs, was telling me that a country is like a human body - men and women are two lungs - if you reduce the power of women, you crush them with inhibitions and imaginary restrictions based ultimately on man’s superior physical power, in a nation, it is exactly like a human being who has one lung perforated by tuberculosis and only one lung to work.

… Oh my sisters, agitate! Leave no peace to the men till they give you religious freedom by opening mosques for prayers, not side by side with men, but in reserved quarters attached to all the mosques, so that the habit of praying public and self respect and self-confidence becomes general amongst women.  On that foundation of religious equality, you can then build social, economic, patriotic equality, with men…”

"From these necessary and wholesome rules the jealousy of the Abbassides, borrowing from the practice of the later Persian Sassanian kings, developed the present system ... which means the permanent imprisonment and enslavement of half the nation. How can we expect progress from the children of mothers who have never shared, or even seen, the free social intercourse of modern mankind?  This terrible cancer that has grown since the 3rd and 4th century [sic] of the Hijra must either be cut out, or the body of Muslim society will be poisoned to death by the permanent waste of all the women of the nation."

The tremendous spiritual status of women in Ismaili history and thought:

In Ismaili history, women have not only played important material and political roles. The Ismaili esoteric tradition recognizes a number of women who held important spiritual ranks and performed religious functions alongside the Prophets and Imams: According to the Ismaili esoteric interpretation of prophetic history, these women were the hujjats (proofs) of the Imam: they held the rank of spiritual mother [like the Ismaili Pirs] and were responsible for disseminating the esoteric knowledge or ta’wil of the Imams to the disciples. Typically, this female hujjat was a daughter of an Imam, a wife of an Imam, or a mother of an Imam. Bibi Fatimah al-Zahra possessed all three of these relationships. Each of these great women are the manifestation of the “Esoteric Feminine” – the Celestial Light which the Ismaili metaphysics calls the Universal Soul (al-nafs al-kull) and the biblical tradition calls Sophia.