There is little evidence she (A’isha) was 9 years old. Historical analysis of the sources shows she was 14–16 when she was betrothed.

Also, if you watch Game of Thrones, you would understand how marriage in 7th century Arabia is really not about romance, nor about sexual desire. It was about alliance building, merging clans, solidifying tribal loyalties and also bringing vulnerable women into the protection of powerful leaders.

Prophet Muhammad married 12 women over his lifetime: 1 marriage was for love (Khadijah); 6 marriages (Sawda, Hafsah, Zaynab, Umm Salamah, Umm Habibah, Maymunah) were to vulnerable widowed and divorced women whom Muhammad took into his house and protection; 2 marriages were proposed or requested by the women (Safiyyah, Zaynab); 2 marriages were to form familial and political alliances with another tribe (A’isha, Juwariyah); 1 marriage (Maryam the Copt) was to a slave girl sent to Muhammad by the Archbishop of Alexandria (more on Muhammad’s marriages here).

Contrary to popular myth, A’isha was not six years old when she married Muhammad. All of the historical evidence when examined as a whole suggests that  A’isha was born 4 years before Muhammad began his prophetic mission and was married to the Prophet on her father’s initiative in the tenth year of Muhammad’s mission (620) – she was therefore around 14 years of age at the time of betrothal (620 AD) and 16-18 years old at the date of marriage (624 AD) and this was a normal marriage age until quite recently (all the evidence is analyzed in this peer reviewed article and a non peer reviewed but more comprehensive layman article). 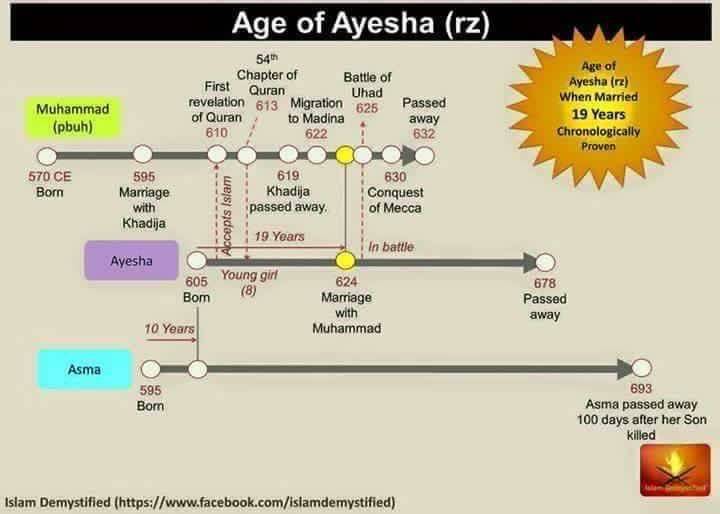