What is the esoteric meaning (ta'wil) of Mary's (Maryam) virgin conception?

In the story of Mary and Jesus, the Qur’ān describes how Mary received the Spirit of God – due to which she gave birth to the Prophet Jesus:

“And Mary, daughter of ‘Imran, who guarded her sexual organ and We breathed into it from Our Spirit.  And she testified to the truth through the Words of her Lord and His Books and she one of the devout servants.”
(Holy Qur’ān 66:12)

Nāsir-i Khusraw gives the esoteric interpretation (ta’wīl) of the God breathing His Spirit into the sexual organ of Mary as follows:

“This means that Mary did not turn her ears to the devils (iblisan) with their speeches. This is because the sexual organ is like the ear, and ear symbolizes the sexual organ because through it comes the corporeal form (ṣurat-i jismāni), and through the ear the psychic form (ṣurat-i nafsāni). ‘She guarded her sexual organ’ means that she did not turn her ear to those who only teach the zahir, the formal side of the religion, disregarding the esoteric interpretation (ta’wīl).”
– Sayyidna Nāsir-i Khusraw,
(Shish Fasl or Six Chapters, transl. W. Ivanow, Chapter 3, Click Here to Read)

For Nāsir-i Khusraw, the Divine Spirit was breathed into the “ear” of Mary and not her sexual organ.  This also shows that the actual form of the ‘breathing of Spirit’ was something audible – a Word (kalimah).  The sexual organ in this verse is used as a symbol or metaphor for the ear.  Just as the sperm – the source of the physical form – is deposited in the womb by means of the sexual organ, the Divine Word – the source of the spiritual form – is deposited in the soul through the ear.

Therefore, it is not surprising that even early Christian theology maintained that the Holy Spirit impregnated the Virgin Mary with Jesus not through her sexual organ but by means of her ear.  Mary received the Spirit by ‘hearing’ the Word of God which was spoken to her. 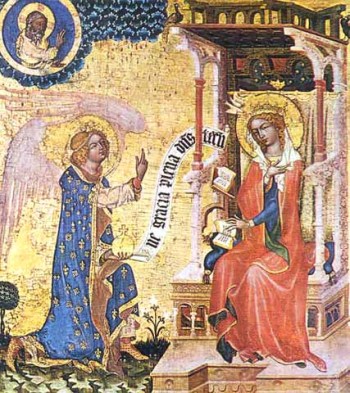 The end of the verse also mentions how Mary testified to the truth through the Words (kalimāt) of God – these being the same Words by which Abraham was tested.  The Qur’ān also refers to Jesus as a Word (kalimah) from God which He breathed into Mary:

“The Messiah, Jesus son of Mary, was only the Messenger of God, and His Word (kalimatuhu) that He cast to Mary, and a Spirit from Him…”
(Holy Qur’ān 4:171)

The above verse states that Jesus was the God’s Spirit and Word (kalimah) which He “cast” (alqā) into the Virgin Mary.  This is significant because in Ṣūrah al-Muzzammal (73:53), the exact same verb – alqā (to cast, to commit, to present) – is used when the verse says to the Prophet Muḥammad – “Indeed we will cast (sanulqī) upon you a Weighty Word”.  Thus, the “casting” of the Word of God upon the Virgin Mary is identical to the “casting” of the Word of God to the Prophet Muḥammad.

Even in the case of Prophet Jesus, the Qur’ān indicates that God inspired him with the Holy Spirit.  This Spirit is initially given to a Prophet in the form of a Word (kalimah) or Divine Name (ism ilahi) – as shown in the cases of Prophet Adam and the Virgin Mary.

Read the original article in its entirety here: https://ismailignosis.com/2014/07/03/iqra-muhammad-meditated-upon-the-name-of-god-as-the-quran-was-revealed/