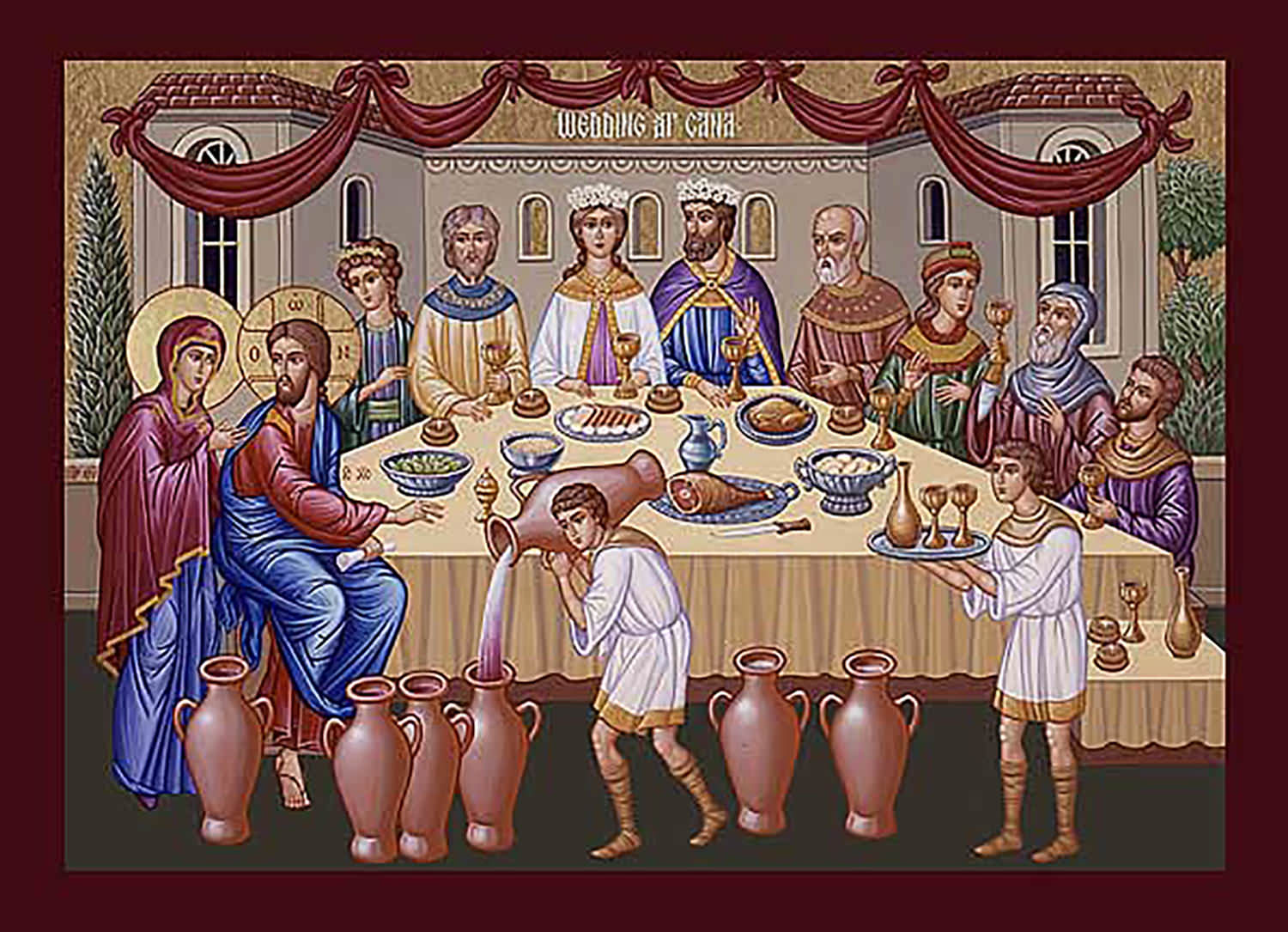 On the third day there was a wedding at Cana in Galilee, and the mother of Jesus was there. Jesus also was invited to the wedding with his disciples. When the wine ran out, the mother of Jesus said to him, "They have no wine." And Jesus said to her, “Woman, what does this have to do with me? My hour has not yet come.” His mother said to the servants, “Do whatever he tells you. Now there were six stone water jars there for the Jewish rites of purification, each holding twenty or thirty gallons. Jesus said to the servants, “Fill the jars with water.” And they filled them up to the brim. And he said to them, “Now draw some out and take it to the master of the feast.” So they took it. When the master of the feast tasted the water now become wine, and did not know where it came from (though the servants who had drawn the water knew), the master of the feast called the bridegroom and said to him, “Everyone serves the good wine first, and when people have drunk freely, then the poor wine. But you have kept the good wine until now.”
- John 2:1-10

The good wine running out represents how the Jewish shar'iah and tanzil had lost power and potency leaving people intoxicated in its zahir (hung up on the outer forms such as the laws) since no inner meaning remained. According to the master of the feast, normally at this point the "poor wine" would be brought in because guests are too drunk to be able to tell the difference. The poor wine that gets snuck in represents the expired and corrupted tanzil without its ta’wil taught by the false Imams like the Pharisees.

"[Pharisees] observed the Law dutifully and attacked the followers of the Nazarene Jesus who were posing a challenge to his Pharisaic tenets and way of life...Pharisees are...a well‐connected political group who are determined to defend that kind of Jewish community which Jesus threatened and which could be outside Pharisaic control....They are the zealous advocates of a Judaism which contrasts with the interpretation of the Law ascribed to Jesus."
- "Pharisees." In  A Dictionary of the Bible. , edited by W. R. F. Browning.  Oxford Biblical Studies Online, http://www.oxfordbiblicalstudies.com/article/opr/t94/e1462

The water being filled into stone water jars normally used for Jewish rites of purification is significant in that it shows that Jesus is about to reinvigorate the Jewish tradition with the help of tay'id. Water symbolizes tay'id (divine inspiration) that Jesus was receiving from God. The fact that there were six stone jars represents the 6 Natiqs (Speaker-Prophets) who turn water into wine, meaning they each create a set of symbols and parables or bring laws infused with inner meanings from the tay'id (water) that they receive. These six Natiqs were Adam, Noah, Abraham, Moses, Jesus, and Muhammad.

Nasir Khusraw in his Wajh-i Din (Discourse 31) gives the  ta'wil of land watered by rain and streams as referring to the possessors of tay'id (Natiq, Asas, Imam, Bab, and Hujjat). Jesus was the next Natiq (Speaker-Prophet who initiates a new cycle, bringing a new law) after Moses.

Jesus turns this water into good wine or proper tanzil, showing how Jesus is a greater unfolding rather than feeding them bad wine after they had been drinking the wine of Judaism. He is refreshing the Jewish faith with his new tanzil - his new parables, symbols, and teachings which were more appropriate for that time and context. This is symbolized by the master of the feast saying “...But you have kept the good wine until now” whereas false Imams like the Pharisees were serving poor wine that had lost its potency or inner meaning.

Nasir Khusraw also gives the ta'wil of (47:15) of the four rivers of paradise where each river corresponds with one of the four hadds (ranks: Universal Intellect, Universal Soul, Natiq, Asas). In his ta'wil, the river of wine flows to the Natiq. He also speaks about how differences among people developed because they become perplexed and swoon due to the parables and symbols in the Book and shariat. This occurs when the “good wine” runs dry and false imams attempt to sneak in “poor wine”, the meaning of which has been explained above.

"... From the Divine Word flows wine in the nāṭiq by which is the power of the bodies and by which people become perplexed and babble. Similarly, the nāṭiq has compiled the sharī‘at by which the customs and rites are preserved. The difference among people occurred with respect to the parables and similes that are in the Book and the sharī‘at, because of which they become perplexed and swoon, just as they swoon by drinking wine..."
-  Nasir-i Khusraw, Wajh-i Din, Discourse 11