Are Muslims Violent? How many Muslims support terrorism?

Today there are almost 1.7 billion Muslims in the world, making up a fifth of the world’s population. Are Muslims a violent people by nature and a threat to world peace? The best way to answer the question is to calculate the numbers from credible sources – experts, Pew, Gallup, and academic studies.

1. Fact: There are only about a total estimated 100,000 militant extremist Muslims in the world. That is less than 0.01% of the global Muslim population of 1.7 billion people. “The vast majority of the estimated 85,000 to 106,000 militants fighting with militant jihadist groups around the world are fighting for purely local reasons, for instance, trying to install Sharia law in northern Nigeria or trying to impose Taliban rule on Pakistan and Afghanistan, while only a small number of these militants are focused on attacking the West.”
Source: P. Bergen, National Security Analyst and E. Schneider, Research Associate:  http://us.cnn.com/2014/09/26/opinion/bergen-schneider-how-many-jihadists/index.html

Interviewer: What are the root causes of terrorism?
"Unsolved political conflicts, frustration and, above all, ignorance. Nothing that was born out of a theological conflict …. Take away the causes of extremism and extremists can come back to a more reasonable political agenda. That change to me is one of the wonderful things about the human race."
– His Highness the Aga Khan,  Spiegel Online Interview (2nd), ‘Islam Is a Faith of Reason’ (Berlin, Germany)

"[T]he Western tendency [is] to perceive all Muslims or their societies as a homogeneous mass of people living in some undefined theocratic space, a single “other” evolving elsewhere. And yet with a Muslim majority in some 44 countries and nearly a quarter of the globe’s population, it should be evident that [the Muslim] world cannot be made up of identical people, sharing identical goals, motivations or interpretations of the faith. It is a world in itself, vast and varied in its aspirations and in its concerns.  Is there not something intellectually uncouth about those who choose to perceive one [and a half] billion people of any faith as a standardised mass? "
– His Highness the Aga Khan,  Brown University Commencement Ceremony, 26 May 1996 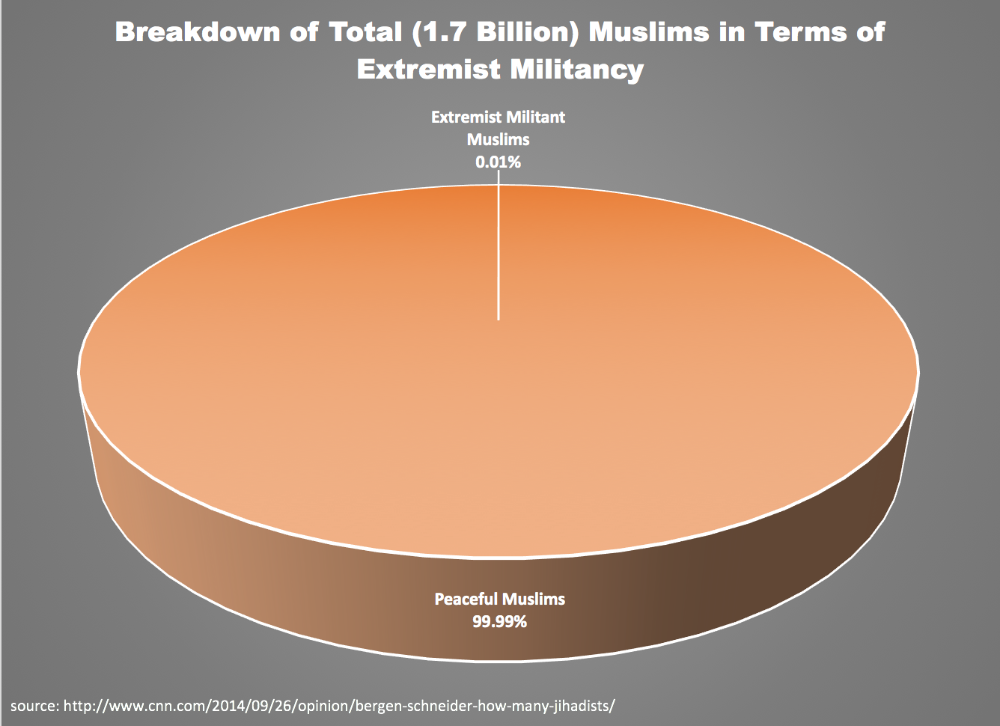 2. Fact: According to terrorism experts and studies, religion in general and Islam in particular is NOT the main motivator of terrorism; in reality, political conflicts, warfare, and social and economic instability are the main cause.

“What 95 percent of all suicide attacks have in common, since 1980, is not religion, but a specific strategic motivation to respond to a military intervention, often specifically a military occupation, of territory that the terrorists view as their homeland or prize greatly. From Lebanon and the West Bank in the 80s and 90s, to Iraq and Afghanistan, and up through the Paris suicide attacks we’ve just experienced in the last days, military intervention—and specifically when the military intervention is occupying territory—that’s what prompts suicide terrorism more than anything else.”
– Robert Pape, who has Studied Every Suicide Attack in the World:  https://www.thenation.com/article/heres-what-a-man-who-studied-every-suicide-attack-in-the-world-says-about-isiss-motives/

“ Far from being religious zealots, a large number of those involved in terrorism do not practise their faith regularly. Many lack religious literacy and could actually be regarded as religious novices. Very few have been brought up in strongly religious households, and there is a higher than average proportion of converts. Some are involved in drug-taking, drinking alcohol and visiting prostitutes. MI5 says there is evidence that a well-established religious identity actually protects against violent radicalisation.”
Source: MI5 Study: http://spiritualperception.org/the-tactics-of-bigotry/

“Religion is not the strongest driving force behind thousands of foreign fighters joining ISIS and other terrorist groups in Iraq and Syria, a report by US military researchers has found.  A new study by the Combating Terrorism Center (CTC) at West Point revealed that the vast majority of almost 1,200 militants surveyed had no formal religious education and had not adhered to Islam for their entire lives.”
Source:  http://www.independent.co.uk/news/world/europe/isis-foreign-fighters-british-european-western-dying-radicalised-islam-not-strongest-factor-cultural-a7421711.html

“ A French journalist’s ISIS captors cared little about religion, Didier Francois — who spent over 10 months as the group’s prisoner in Syria — told CNN’s Christiane Amanpour in an exclusive interview on Tuesday. “There was never really discussion about texts or — it was not a religious discussion. It was a political discussion.” “It was more hammering what they were believing than teaching us about the Quran. Because it has nothing to do with the Quran.” “We didn’t even have the Quran; they didn’t want even to give us a Quran.”
Source:  http://www.cnn.com/2015/02/03/intl_world/amanpour-didier-francois/

“ There is no theological dimension. Their knowledge of Islam is minimal and they don’t care, although the religious myth plays an emotional role.” “None of them was active in religious activities (proselytism): when they preach Islam it is to recruit other radicals, not to spread the good news. This explains why (1) the close monitoring of mosques brings little information; (2) imams have little or no influence on the process of radicalisation; (3) “reforming Islam” does not make sense: they just don’t care about ‘what Islam really means.’”
Source:  https://newmatilda.com/2016/03/26/jihad-not-really-about-religion/

3. Fact: Most terror attacks in the Western world (Europe, USA) are committed by non-Muslims, yet terrorist attacks by Muslims receive 449% MORE MEDIA COVERAGE than other attacks from 2011-2015. This is per the findings of an academic study from Georgia State University quoted below:

“We examined news coverage from LexisNexis Academic and CNN.com for all terrorist attacks in the United States between 2011 and 2015.  Controlling for target type, fatalities, and being arrested, attacks by Muslim perpetrators received, on average, 449% more coverage than other attacks. Given the disproportionate quantity of news coverage for these attacks, it is no wonder that people are afraid of the Muslim terrorist. More representative media coverage could help to bring public perception of terrorism in line with reality.”
Source: Kearns, Erin M. and Betus, Allison and Lemieux, Anthony, Why Do Some Terrorist Attacks Receive More Media Attention Than Others? (March 5, 2017). Available at SSRN:  https://papers.ssrn.com/sol3/papers.cfm?abstract_id=2928138

DataGraver has documented the number and location of terrorist attacks from 1970-2015 and the results clearly show that most terrorism was not committed by Muslims and occurred in Western Europe, Central America and South America  for much of the past until recently increasing in the Middle East – this being due to increased war, military intervention, and instability in the region beginning with the Gulf War and increasing since then:

4. Fact: The biggest victims of Terrorism ARE Muslims: "...Muslims are the most affected by terrorism around the world...While attacks by Muslims against non-Muslims in Europe have dominated headlines recently, researchers from the National Consortium for the Study of Terrorism and Responses to Terrorism (START), a research and education center at the University of Maryland, believe that Muslims are in fact the most likely victims of terrorism worldwide. START Executive Director William Braniff and his team studied the causes and human consequences of terrorism, compiling details about attacks...What they found is that — although they did not always have information about the religious beliefs of the victims — Muslims were the most affected overall."

Source: – National Consortium for the Study of Terrorism and Responses to Terrorism (START): http://abcnews.go.com/Politics/muslims-absolutely-group-victimized-global-terrorism-researchers/story?id=48131273

The biggest victims of ISIS and Al-Qaeda ARE Muslims; and not surprisingly, the overwhelming majority of Muslims hate ISIS and al-Qaeda. To say otherwise – to claim that substantial numbers of Muslims support ISIS and other terror groups is like saying that most murder victims support their murderers, or that most rape victims support their rapists and in fact want to emulate them. According to a UN Report, ISIS “carried out attacks deliberately and systematically targeting civilians and civilian infrastructure, with the intention of killing and wounding civilians.” The UN concluded that in the first eight months of 2014, at least 9,347 civilians had been killed and at least 17,386 wounded. While all these deaths are not attributable to ISIS alone, ISIS is identified as the primary actor.”
Source – UN Report:  http://www.thedailybeast.com/articles/2014/10/07/isis-s-gruesome-muslim-death-toll.html

6. Fact: Muslims out of many other religious groups are MOST LIKELY to be against attacks on civilians and LEAST LIKELY to support violence against innocent people. Source: Pew, Gallup and Populus Polls aggregated here: http://www.loonwatch.com/2011/08/surveys-show-muslims-in-every-country-less-likely-to-justify-killing-civilians-than-americans-and-israelis/

“Muslims hold no monopoly on extremist views and are, in fact, on average more likely than American public to unequivocally condemn attacks on civilians.”
– John Esposito, (Who Speaks for Islam, 94) 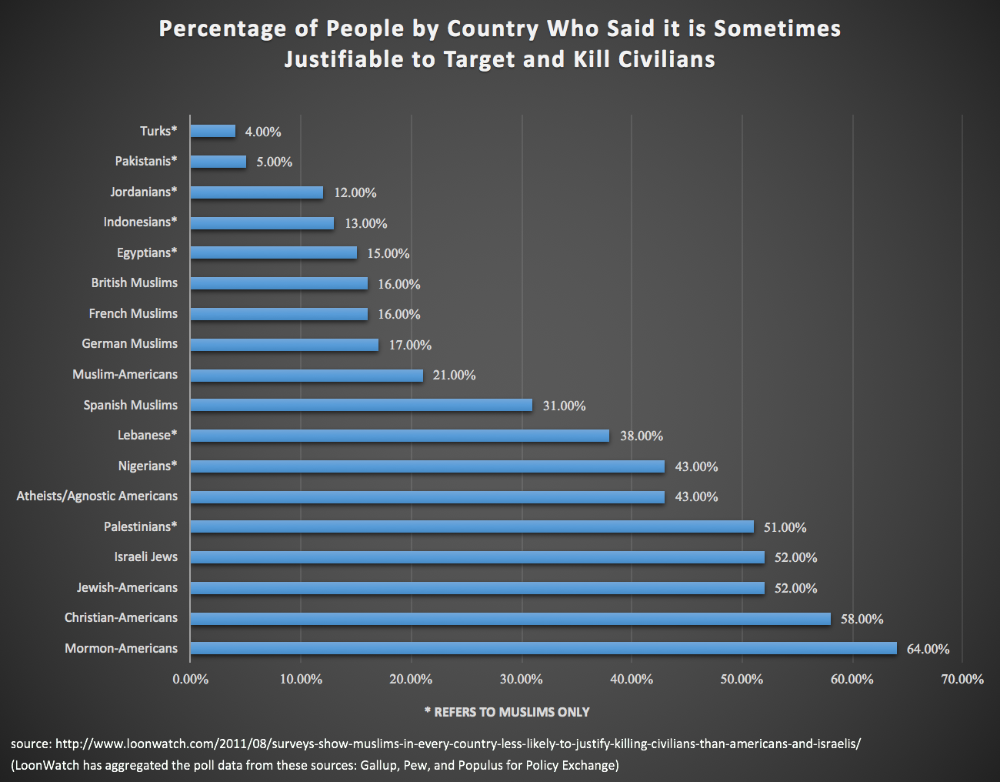 What is Apostasy? Some people claim that all Muslims and the Qur’an believe that anyone who changes his religion from Islam to another religion are guilty of apostasy and should be killed. Let it be very clear that the Qur’an contains no such law. The Qur’an repeatedly mentions: “There is no compulsion in religion” (2:256), and “Let him who will believe and let him who will disbelieve”(18:29). The definition of “apostasy” in Islamic legal discourse is not about changing one’s personal faith or religion; apostasy is a political construct of pre-modern Muslim empires and meant treason against the imperial state and supporting another empire (like the Byzantines). More on this here:  http://www.huffingtonpost.com/kashif-n-chaudhry/does-the-koran-endorse-ap_b_5539236.html and here: http://www.aljazeera.com/indepth/opinion/2014/05/islam-saudi-apostasy-201458142128717473.html

" You would think that an educated person in the 21st century should know something about Islam; but you look at education in the Western world and you see that Islamic civilizations have been absent. What is taught about Islam? As far as I know -- nothing. What was known about Shiism before the Iranian revolution? What was known about the radical Sunni Wahhabism before the rise of the Taliban? We need a big educational effort to overcome this. Rather than shouting at each other, we should be learning to listen to each other. In the way we used to do it, by working together, with mutual give-and-take. Together we brought about some of the highest achievements of human civilization. There is a lot to build on. But I think you cannot build on ignorance."
- His Highness the Aga Khan,  Spiegel Online Interview (2nd), ‘Islam Is a Faith of Reason’ (Berlin, Germany)

“The argument that religion causes violence sanctions a dichotomy between, on the one hand, non-Western, especially Muslim, forms of culture, which – having not yet learned to privatize matters of faith – are absolutist, divisive, and irrational, and Western culture, on the other, which is modest in its claims to truth, unitive and rational. This dichotomy, this clash-of-civilisations worldview, in turn can be used to legitimate the use of violence against those with whom it is impossible to reason on our own terms. In short, their violence is fanatical and uncontrolled; our violence is controlled, reasonable, and often regrettably necessary to contain their violence.”
- William Cavanaugh, The Myth of Religious Violence, 17