Is the Qur'an a Book of Violence?

"The present condition of mankind offers surely, with all its dangers and all its challenges, a chance too — a chance of establishing not just material peace among nations but that better peace of God on earth. In that endeavour Islam can play its valuable constructive part, and the Islamic world can be a strong and stabilising factor provided it is really understood and its spiritual and moral power recognised and respected. "
- Imam Sultan Muhammad Shah Aga Khan III,
Chapter 2: Islam, The Religion of My Ancestors (The Memoirs of Aga Khan III), 1954

What does the Qur'an actually say about Non-Muslims?

The general Qur’anic guidance about how Muslims should view and deal with non-Muslims is perhaps the most universal and charitable found among all world religions.

How the Qur’an views OTHER faiths and communities:

“For each We have appointed a divine law and a traced-out way. Had God willed He could have made you one community. But that He may try you by that which He hath given you (He hath made you as ye are). So vie one with another in good works. Unto God ye will all return, and He will then inform you of that wherein ye differ.”
- Qur’an 5:48

What the Qur’an says about the salvation of other religious communities:

“Lo! Those who believe (in that which is revealed unto thee, Muhammad), and those who are Jews, and Christians, and Sabaeans - whoever believeth in God and the Last Day and doeth right - surely their reward is with their Lord, and there shall no fear come upon them neither shall they grieve.”
- Qur’an 2:62

What does the Qur’an say about human diversity:

“O mankind! Lo! We have created you male and female, and have made you nations and tribes that ye may know one another. Lo! the noblest of you, in the sight of Allah, is the best in conduct. Lo! Allah is Knower, Aware.”
- Qur’an 49:13

What about the so-called "violent" Qur'an verses?

The verses that are frequently quoted to prove the inherent violence of the Qur'an are usually taken out of context. What is today called the Qur’an was originally a set of oral recitations uttered by Prophet Muhammad over 23 years in various times, places, contexts, and situations. When the commonly cited "violent verses" are examined in their proper context, an altogether different picture emerges:

One does not need to resort to any allegorical or metaphorical readings of these Quranic passages; viewing them in the FULL VERSE and CHAPTER that they occur and their historical context, just as one would be expected to read any text, more than suffices to show that the Qur'an does NOT command unconditional violence against non-Muslims. When Islamophobes, Christian apologists, and “atheist Muslims” impose their own problematic reading of these verses - stripped of their textual and historical context - they ignore the very function and purpose of language. In fact, they cannot even claim to read the Qur’an literally because a literal reading would include all the non-violence clauses cited above. All the Qur'anic verses that speak about warfare against some group were revealed and recited through the Prophet Muhammad when his community was in the midst of a defensive war – they had to leave Mecca due to their lives being in danger, and even in Medinah, Muhammad and his community were facing various attacks by the Meccan polytheists and other tribes (including treasonous actions from their own allies). After a series of victories, Muhammad’s community began to stabilize itself and entered into peace treaties with their Meccan enemies and other tribes; however, these peace treaties were often broken by the Meccans and, it should be remembered, there was no rule of law or UN peace keeping force at that time to enforce treaties. Even then, Muhammad had very clear rules for warfare – attacks on noncombatants, women and children, destruction of property, torture, etc. – were all OFF LIMITS.

Whether one holds the Quran to be revelation or not, it is, nevertheless, a historical document bearing witness to the events of its time and the experiences of the early Muslim community. The scholar of Islam, John L. Esposito, summarizes the Islamic tradition’s ethos regarding warfare and violence as follows:

Although atrocities and acts of terrorism have connected Islam with terrorism, the Islamic tradition places limits on the use of violence and rejects terrorism, hijacking, and hostage taking. As happens in other faiths, mainstream and normative doctrines and laws are ignored, distorted, or co-opted and misinterpreted by a radical fringe. Islamic law, drawing on the Quran, sets out clear guidelines for the conduct of war and rejects acts of terrorism… The Quran provides detailed guidelines and regulations regarding war: who should fight (48:17, 9:91), when fighting should end (21:92), and how to treat prisoners (47:4). It emphasizes proportionality in warfare: “Whoever transgresses against you, respond in kind” (2:194). Other verses provide a strong mandate for making peace: “If your enemy inclines toward peace, then you too should seek peace and put your trust in God” (8:61) and “Had Allah wished, He would have made them dominate you, and so if they leave you alone and do not fight you and offer you peace, then Allah allows you no way against them” (4:90).
- John Esposito, What Everyone Needs to Know about Islam, 140

Among the most often cited verses is this one: "Kill the idolaters wherever you find them, and capture them, and blockade them, and watch for them at every lookout..." (Quran 9:5). The verses that come immediately before 9:5 state, "Those with whom you have treaties are immune from attack." It further states, "Fulfill your treaties with them to the end of their term, for God loves the conscientious." Now, in its proper context, verse 9:5 can be properly understood. This was a guidance to the Prophet at that specific time to fight those idolaters who, as 9:4 mentions, violated their treaty obligations and helped others fight against the Muslims. It is not a general command to attack all non-Muslims, and it has never signified this to the overwhelming majority of Muslims throughout history. Read more about the Qur’an’s so-called violence verses here:  http://www.huffingtonpost.com/kabir-helminski/does-the-quran-really-adv_b_722114.html

It should be kept in mind that Muslims through history do not interpret the Qur’an through Google searches and anti-Islam websites. Qur’anic exegesis is a religious science with rules and norms studied by expert scholars for decades. One of these is the concept of general verses and particular verses. General verses have broad application through time and space and particular verses [i.e. all the verses about war] are only restricted to certain scenarios. The below diagram, which has been circulating in social media, gives a sample of how the verses about warfare are clearly limited in scope and applicability: 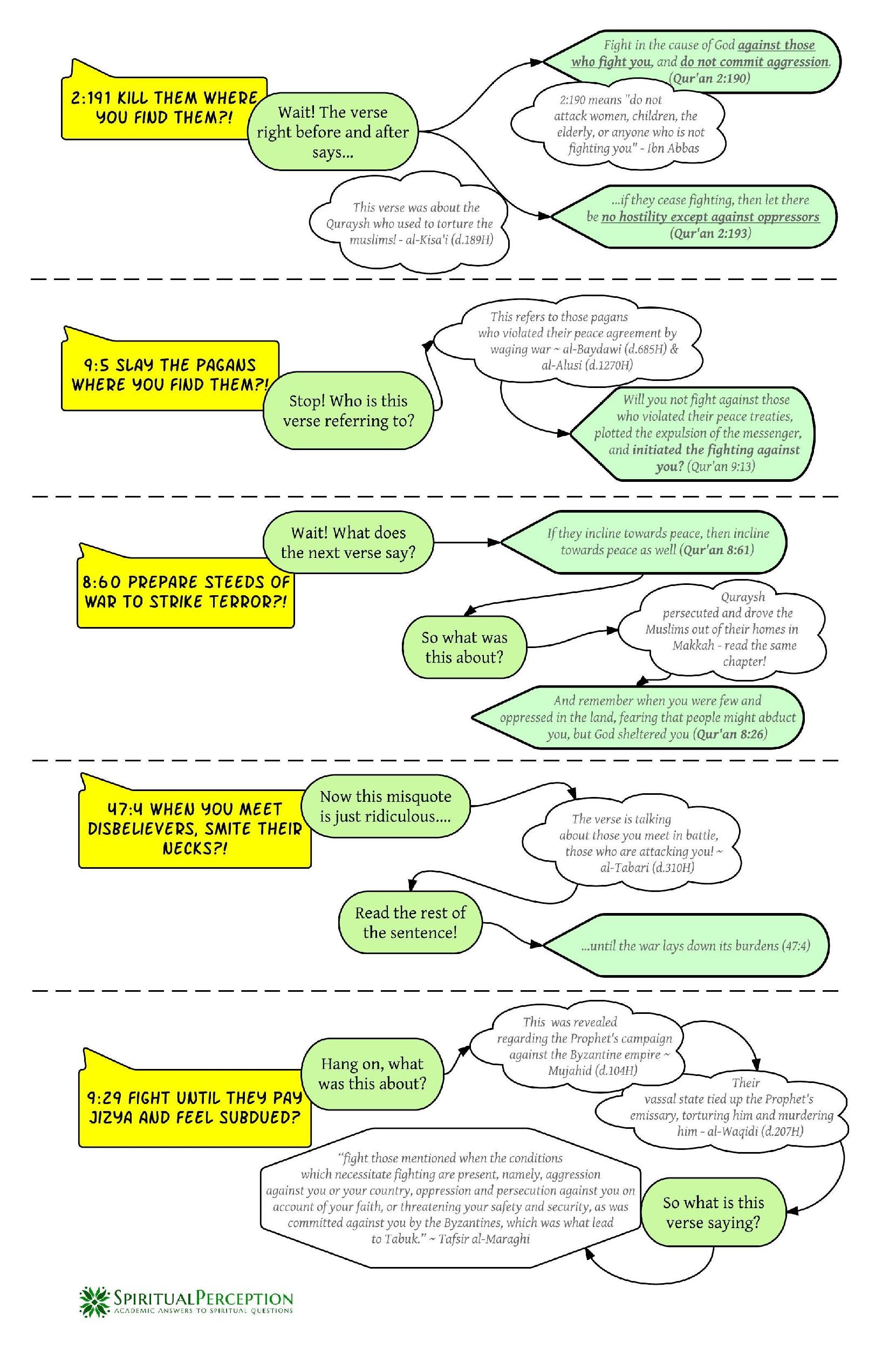 “Far from being religious zealots, a large number of those involved in terrorism do not practise their faith regularly. Many lack religious literacy and could actually be regarded as religious novices. Very few have been brought up in strongly religious households, and there is a higher than average proportion of converts. Some are involved in drug-taking, drinking alcohol and visiting prostitutes. MI5 says there is evidence that a well-established religious identity actually protects against violent radicalisation.”
(Source: MI5 Study: http://spiritualperception.org/the-tactics-of-bigotry/)

“A French journalist’s ISIS captors cared little about religion, Didier Francois — who spent over 10 months as the group’s prisoner in Syria — told CNN’s Christiane Amanpour in an exclusive interview on Tuesday. “There was never really discussion about texts or — it was not a religious discussion. It was a political discussion.” “It was more hammering what they were believing than teaching us about the Quran. Because it has nothing to do with the Quran.” “We didn’t even have the Quran; they didn’t want even to give us a Quran.”
Source: http://www.cnn.com/2015/02/03/intl_world/amanpour-didier-francois/

Hopefully this article has sufficiently demonstrated the lack of merit in the articles, memes, and posts that present incomplete, cherry-picked, and decontextualized Qur'anic verses in order to malign Islam and adherents - who it should be noted belong to diverse interpretations of faith, cultures, political circumstances, and socio-economic status. Rather than wasting time creating incorrect, hate-spreading, and ignorant memes of such nature, it would benefit everyone involved much more to actually take the time and learn about Islam. 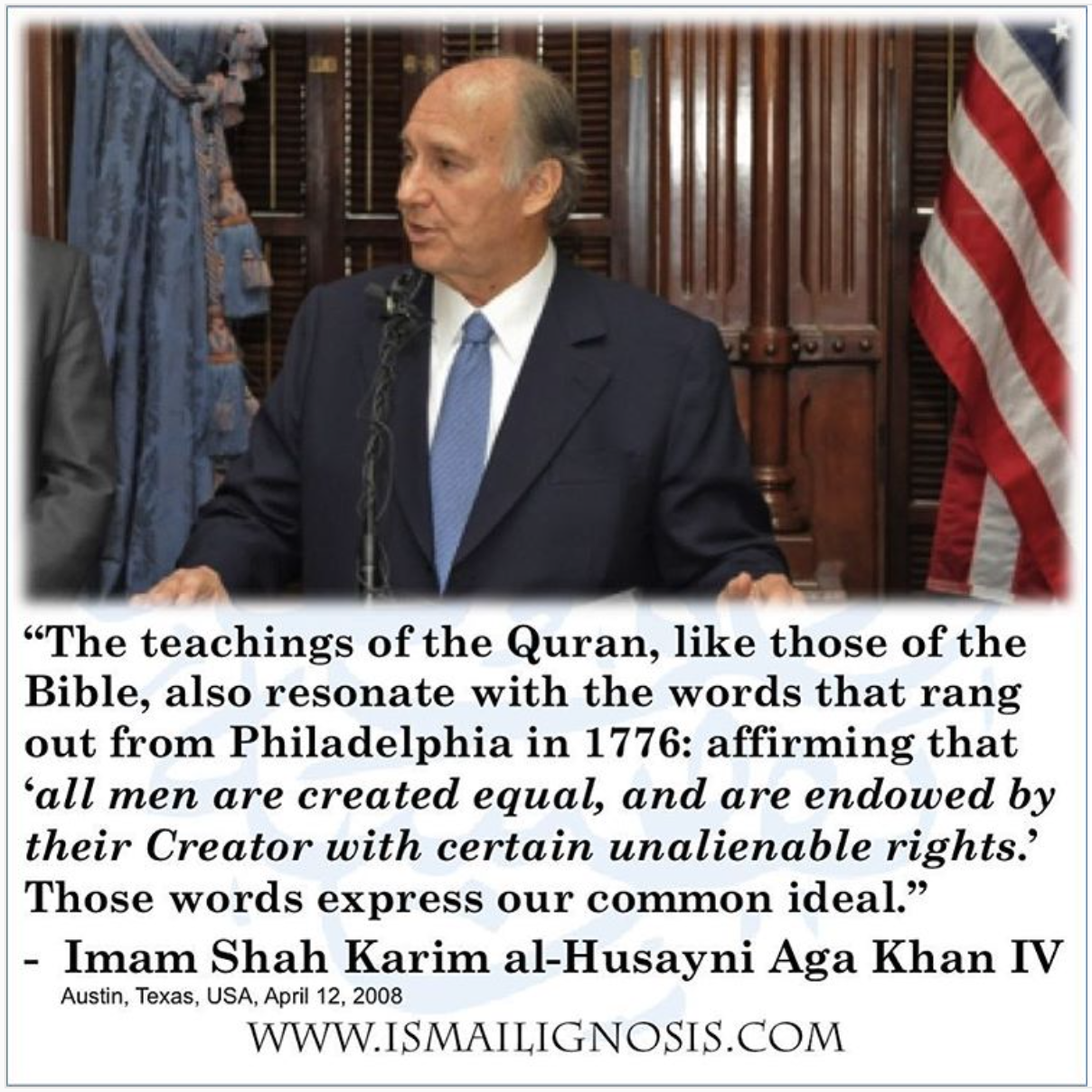